Cyberpunk RED
Zhirafa Technical Manufacturing is a Russian robotics manufacturer from the Neo-Soviet Union based in the Pacific port city of Vladivostok. The corporation gained a lot of influence within the nation relatively quickly.[1][2]

Zhirafa Technical Manufacturing, or Zhirafa, is a Russian robotics manufacturer from the Neo-Soviet Union. The corporation gained a lot of influence within the nation relatively quickly. The Soviets were never able to break into the technological markets with how far behind they were from the most countries. Not until Zhirafa finally was able to break into the markets with their cleaning robots and security drones.[3]

Zhirafa Technical Manufacturing was founded by its CEO, Artyom Sokolov, and his ex-Edgerunner friends with healthy savings built on mercenary work during the Fourth Corporate War.[3] The Neo-Soviet Union after the Fourth Corporate War was weakened by antiquated technology and an unstable economy that had been entirely based on fossil fuels. The major economic power, SovOil, had managed to do very well during the war, however most people were already aware that sooner or later that the oil would run out or CHOOH2 would make fossil fuels obsolete and the Soviet Union's economy would collapse.[3] Russia's ability to compete in the international tech market was still extremely limited. Compared to most other nations, the Soviets tech was often considered garbage.

However in 2039, this changed with the GRAF3 tech entering the market. This construction robot had a reasonable price and proved itself to be durable and reliable as it could easily be repaired. The GRAF3 was the perfect product for cleaning the mess after the war. Due to the price local governments bought them in bulk, and small communities could also obtain one that would last for years. Zhirafa was never questioned on how it got founded or how it spread its influence so far across Russia so soon after completing their first project. Many believed Zhirafa's success could be attributed to the activity of the Bratva criminal syndicate and groups of allied Russian Nomads.[3]

After the GRAF3 broke into the market, the Zhirafa Corporation took on rocket Russian tech to new heights with the release of several lines of drones and robots.[3] Besides the GRAF Line, the most notable and ubiquitous development of Zhirafa is the Savanna Line, a line of aerial and terrestrial combat drones for use by security and law enforcement. 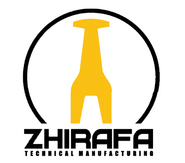 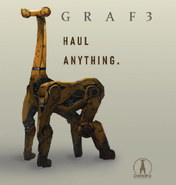