Corporation Report 2020 Volume 1
Firestorm Shockwave
Cyberpunk RED
Cyberpunk 2077
Fear, ever since I can remember. The one thing I can not deny him - he knew how to cause fear in people. He once told me everything of valve is only a flag blowing in wind. And wind is fear. And then ... he blew in my face. That was the one time he was wrong
- Yorinobu, Cyberpunk 2077

Yorinobu Arasaka (荒坂 頼宣) is the second son to Saburo Arasaka, and rebellious bosozoku leader of the Steel Dragons as well as close affiliate of Iron Lotus.[1] Although a sworn bosozoku leader rockerboy, he eventually became the heir to the Arasaka empire after the death of his elder brother Kei. Yorinobu disagreed with everything his father set out to accomplished, and abandoned everything because of it. He is passionate, caring, and determined more than anything else.

Yorinobu is the charismatic counter to Johnny Silverhand in Tokyo (though he does not play in a band). He was known to rally up the Japanese public to rebel against the corporate overlords. Yorinobu still cared for his sister Hanako and would frequently speak with her behind their father's back, he swore one day to save her. In 2077, Yorinobu still rebels against his father, but has not seen him in decades. However he soon realized that the corporate giant's power was impossible to defeat. At least from the outside.[2]

Yori-kun, you know about Arasaka Security that made our company famous? Well, that's not the thing that has made the company powerful, what made the company powerful was the Arasaka Bank. I know that with enough extortion and political influence, killing the appropriate people and massacring the workers of the appropriate corp, we can restore the glory of the Empire of the Sun and make Japan the biggest superpower of the world.
- Saburo Arasaka, Cyberpunk 2020

Yorinobu was born in September 8, 1995 to Saburo and Michiko Arasaka in Tokyo, Japan. From a young age he was given the riches and benefits of any Arasaka family member would get, including the best education in the country. Growing up alongside his sister Hanako they were happy being within the Arasaka family compound. Yorinobu was raised with a blissful ignorance towards his fathers corporation. Something Saburo thought was important to keep secret until he was ready.

The day after 21 year old Yorinobu graduated from Todai, Saburo brought him to his private chambers at the compound. His father, proud of his accomplishment, explained to him the true nature of the Arasaka Corporation. Rather than agreeing with his father's vision, as his elder half-brother Kei had, Yorinobu was secretly appalled and chose to stay silent as his father kept speaking. That night, after a celebratory dinner given in his honor, Yorinobu slipped out of the compound and vanished into the Tokyo night.[1] Knowing what went on within the corporation he hated what his father was trying to accomplish and vowed to stop him, while also wanting to save his sister from being evolved.

Four years later, 25 year old Yorinobu had gathered about him a cadre of tough Tokyo nomads (Bosozoku): 'Kotetsu no Ryu'...the Steel Dragons. Together, they had sworn to expose and destroy Arasaka. At night they would prowl the canyons of the city, harassing Arasaka employees and unearthing information on Arasaka black operations. Yorinobu's knowledge of Arasaka facilities and corporate procedures gave the Steel Dragons some advantages, but they still lacked the power or information to make serious headway against the corporation. Yorinobu was, however, able to tread the world of the street and the corporate tower with equal facility. When he wasn't not riding with his men, he was travelling the world, meeting with other enemies of Arasaka, looking for funds and equipment. Slowly but surely his operation were growing.

Saburo loved his son, and was greatly saddened by his disloyalty, but acknowledged that Yorinobu needed be dealt with or he threatened his corporation. Kei, who hated Yorinobu for his defection, had sworn to kill his half-brother. Hanako, on the other hand, still loved her brother. Yorinobu was Saburo's only other child by Michiko, and he had always felt a special bond with his sister. Although she was unaware of it at the time, he had sworn to free her from their father's clutches. Once a month Yorinobu and Hanako secretly communicated through the net, reaffirming their fraternal love for one another.[3]

Yorinobu would visit Night City to gather information from his contacts. During one of Arasaka's sweeps on city some of the local contacts of Yorinobu were taken prisoners, interrogated, and later executed. One of these contacts was, Hiraga who knew the identities of many high ranking officials and suppliers to the Steel Dragons. The information obtained of the Steel Dragons was stored in the Arasaka Towers in Night City. Before it could be sent to Kei at the Tokyo Headquarters, Yorinobu had a contact intercept the data before it could be sent. With the data was an order of the assassination of the high ranking officials apart of the Dragons, but his contact was traced down and had to commit seppuku after destroying the data to avoid capture. Unfortunately, the regional security director of Arasaka, Iwasao Koremichi, supposedly had a hard copy with the data.

During the Fourth Corporate War, Yorinobu played a huge role. He didn't side with Militech during the war, despite their attempts to lure him to their side. Instead he played a role in supplying info to the Japanese government that helped their nationalization of Arasaka's native offices.[4] However even after all the damage as well as hearing about the terrorist attack on Arasaka Tower in Night City, it still wasn't enough to destroy Arasaka. Yorinobu learned that it if Arasaka would be destroyed it must be from within.[1][5]

After the war ended, Yorinobu attended his brother's funeral, Kei, it was here he reconciled with his father. With the help of his sister Hanako, Yorinobu would slowly be welcomed to the family again.

In 2045, Yorinobu led the Taka (鷹) Faction of the Arasaka Corporation. He made sure that during the War he was impossible to find and tried to reconcile with his father after. He still played the renegade game and opposed the other factions. As long as his father stayed in control under the Kiji (雉) Faction, Yorinobu would still be out there trying to bring about its downfall. Though he this time he had planned to be more subtle then his pervious schemes.[6]

Yorinobu was the original heir to the Arasaka Empire, before he rebelled and cut ties with his father. For many years he led the Steel Dragons and sought destruction, but soon realized that the corporate giant's power was impossible to defeat. At least from the outside.[2] With the aid of Hanako, Yorinobu was welcomed back to the Arasaka family. He still rebelled against his father, but had not spoken with him in decades. In 2077, Yorinobu saw an opportunity and stole the Relic prototype from one of his father's laboratories in Tokyo.[7] After retreating to Night City in a plan to sell the prototype to Netwatch, he was warned by Anders Hellman that he should consult his father.

Saburo Arasaka arrived in Night City shortly after to retrieve what was stolen and confront Yorinobu alone. In a fit of rage, Yorinobu murdered his father and later covered it up by claiming an assassin had his father poisoned. Yorinobu took full control of the Arasaka Corporation and began to make changes from within. His decisions started to take effect when he started removing facilities in Fukuoka and Kitakyushu in Japan. His plan to sabotage the corporation from within and undo much of what his father built had began.

Yorinobu participated in the Parade to honor his father with the approval of Michiko Arasaka and Hanako Arasaka. During this Hanako was kidnapped and he worked quickly to rescue her with his chief of security Adam Smasher. After successfully rescuing his sister Hanako, Yorinobu made a public statement to anyone that would harm a member of the Arasaka family would be punished.

He decided to order his faction to keep an eye on Hanako and keep her safe in the Arasaka estate, North Oak. Yorinobu later called an emergency meeting of the Arasaka supervisor board in Night City. Top executives from Tokyo, as well as branch directors from Paris, Shanghai, and Kinshasa all to meet in the Arasaka Tower of the American Division headquarters. Yorinobu had a plan for a military coup that would give him and those loyal to his faction complete control of Arasaka Corporation for his plan of sabotage. Part of his plan was also involved his factions in Night City, Kyoto, Dubai, and Paris. The troops loyal to Yorinobu were ordered to destroy all other factions within the corporation as well as to remove the board of directors to gain complete control.[8]

In The Sun ending, Yorinobu is successful in his plans of sabotaging the Arasaka Empire, losing much of it's political power and control over the world. The Relic project is scrapped as the corporation loses billions. The Arasaka Corporation's future is unclear and would take time for reorganization to bring the Megacorp back to stable status. Yorinobu returned to the Tokyo headquarters after he leaving Night City.

In The Devil ending, Hanako along with V stormed the upper echelons of Arasaka tower to dethrone Yorinobu Arasaka's tyrannical reign. Yorinobu explained to V that he tried everything to bring the Arasaka Empire to an end and stop his father from his ideals. Yorinobu reveals he did not seek power and control, but only to free the people of the tyranny of the Arasaka Corporation and free them of their fear of Saburo. If V is successful, Yorinobu's suicide attempt will be stopped and Hanako will comfort her grieving brother as he tells her he does not fear the forthcoming consequences, which are later revealed to be his consciousness being overwritten and replaced with Saburo's engram.[8]

The son of Saburo Arasaka, leader of the world's biggest arms manufacturing corporation. Ever since his young, rebellious years, there's been a lot of friction between Yorinobu and his father, though as to why - that's anyone's guess. Known for his difficult personality and controversial opinions, he doesn't fulfill any important role in Arasaka. Despite his urgent calls for change in the corporation, Yorinobu doesn't really want to take the helm - being a billionaire is currently much more fun.

Saburo Arasaka's younger son was groomed from birth to one day take the helm of the family corporation. However, the night he graduated from college, he and Saburo got into a heated argument. This father-son spat prompted Yorinobu to turn his back on family and form a gang-Kotetsu no Ryu, the Steel Dragons-hellbent on destroying the Arasaka empire. Unsurprisingly, the gang repeatedly failed to achieve its goal. Eventually, with Hanako's help, Yorinobu eventaully ends his exile and returns to the family and business. Though he is no longer the heir apparent, he nevertheless remains a person of great influence. In appearance, Yorinobu is meant to contrast with his ultra-traditionalist father, a modern American plutocrat rather than devoted caretaker of Japanese culture. His face bears the arrogant smirk characteristic of a high-profile heir who leaves to sow his wild cats before returning home to claim his birthright. His choice clothing likewise conveys the immense wealth and opulence typical of a privileged playboy.
The Official Digital Artbook of Cyberpunk 2077 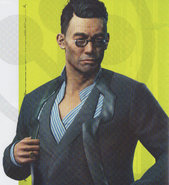 Corpbook Vol. 1
Add a photo to this gallery

Retrieved from "https://cyberpunk.fandom.com/wiki/Yorinobu_Arasaka?oldid=85490"
Community content is available under CC-BY-SA unless otherwise noted.