A Japanese made motorcycle, the Kusanagi's sleek, aerodynamic frame conceals a powerful engine. You're going to need superhuman reflexes to handle it.[1]

The Yaiba Kusanagi CT-3X is the fastest, and unsurprisingly, the most expensive motorcycle, originally built in collaboration with the Arasaka Corporation. Its sleek, aerodynamic frame conceals a wickedly powerful engine. Ideally, anyone riding one should be chipped with reflex boosters to avoid flying into a traffic light at 100MPH when making a sharp turn. The Kusanagi is a favorite among gangers, especially the Tyger Claws.

Offered for sale by Wakako Okada for €$22,000; you can pick it up at a parking lot northeast from the fast travel point "Skyline & Salinas", in Japantown, Westbrook.

"V. In your line of work, one must be quick and punctual. Since you seem to struggle with both, I figured you could use a motorcycle. If you can have only one, let it be the best - the Yaiba Kusanagi. I happen to have one for sale. Buy it and you will not regret it." - Wakako Okada

The bike made its debut in the E3 2077 gameplay demo. An image and description were later revealed in Famitsu magazine (see Gallery below).

The game's official Twitter account also posted an image of the cycle with the caption, "Catching a break with Yaiba Kusanagi..."[2] 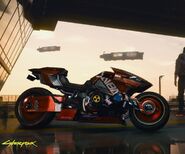 Retrieved from "https://cyberpunk.fandom.com/wiki/Yaiba_Kusanagi_CT-3X?oldid=80773"
Community content is available under CC-BY-SA unless otherwise noted.