The Wraiths are the largest group of Raffen Shiv, or rogue nomads. This group mostly travels at night, preying on the sleeping and unwary. Their leader is named Dogkiller, and is rumored to wear clothing of human skin.[1]

The Wraiths are one of the two prominent nomad groups inhabiting the Badlands. They have a long history of frequent conflict and warring with the other nomad group, the Aldecaldos.[2] The Wraiths also have a custom near 1000 horsepower car that they roam the Badlands in called the Reaver.

While nomads usually operate in a judicial grey area, the Wraiths ignore the law. They are vicious as well as aggressive and have dominated the areas surrounding Night City. They raid small villages as well as attack small groups of nomads and attack weakly guarded corp transports. Cyberware and other equipment used by the gang include reflex boosters, pain editors, heavily modified vehicles, and possibly military-grade equipment.[3]

What little is known of the Wraiths' origins is that they were one of the many nomad-originating gangs on the West Coast, presumably consisting of exiles from nomad nations. The size of the gang is also unknown but they are presumably the size of an average nomad clan, between 300 to 1,200 members.[3]

The main source of income for the Wraiths are the spoils from their raids. They sometimes go to big cities for transportation contracts, but are notoriously unreliable. They often break agreements and keep the loot they were supposed to transport or keep the passengers, either for ransom or for their own enjoyment.[3]

The first and new nomad codes elaborate the various reasons you might be expelled from your family, including "Share with others in your clan" or "Do not keep for yourself that which may help another in your clan." Reading those documents today, it's hard to fight the feeling they were written in different, happier times. These days, nomads are more often expelled from their families for murdering or raping a fellow family member, human trafficking, poisoning the water supply or betrayal of the clan. And we have a word for those nomads: the Raffen Shiv.

Once ousted, most Raffens still maintain their nomadic lifestyles. They form larger groups on the road, but nobody would call these groups family – not even in jest. The Raffen Shiv prowl the Badlands, ambushing unsuspecting travellers, corpo convoys or even – and with particular relish – other nomad camps.

A gang of Raffen Shiv even formed outside Night City's gates: the Wraiths. They're well-organized, effective, and willing to do anything. After all, like all Raffens, they've got nothing left to lose.[4]

Considered by some the eighth Nomad nation, in truth the Raffen Shiv constitute a completely separate group that operates according to entirely different rules. Their very name a blend of Nomad pejoratives, the Raffen Shiv are a motley crew of those exiled from other Nomad groups for violating customs and other transgressions. They thus have no common identity or ethos, no leaders and no recognizable style. They are in essence no more than rural criminals who sometimes form loose equivalents of urban gangs outside major cities, the Wraiths outside Night City being a prime example. Like other Nomads, Wraith apparel has a practical, utilitarian bent. Yet since Wraiths live not on the edge of the law but firmly outside of it, they put a stronger emphasis on stealth and firepower. They mod their rigs with guns and missile launchers for raiding convoys or fending off rivals. Their overall look lacks any of the folksy warmth of true Nomad groups such as the Aldecaldos. Instead, they resemble mercenaries bound only by a common goal: to survive the next hit and make off with the loot.

Wraiths description from the digital artbook 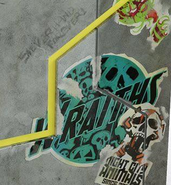