Cyberpunk 2077
My husbands knew Westbrook. Very high in the Tyger Claws. They did what made the best eddies. Sold sex and black-market tech.

Wakako Okada is the top fixer of the Westbrook District in Night City. She can be found at her own office in Japantown.

Wakako runs a pachinko parlor out of Jig-Jig Street in Japantown. She has had five husbands over her long life, outliving them all. She has nine sons who are all high-ranking members of the Tyger Claws, but she keeps them strictly in line to ensure that they are never the target of a gig picked up by another fixer. Despite her close ties to the gang, she takes a coldly pragmatic view when its members are assassinated by mercs, believing that only the stupid and greedy would fall to such an ignominious fate.[1] 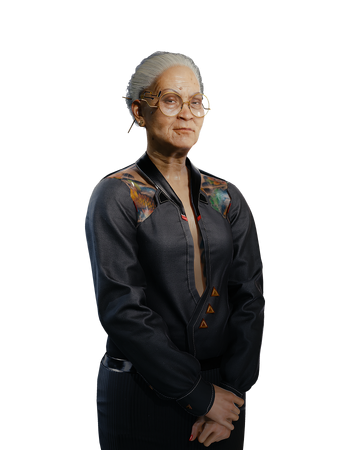 If you're looking for decent-paying gigs in Westbrook, go to the pachinko parlor on Jig-Jig Street run by a fixer named Wakako Okada. Rumors abound, but as of yet nobody's worked up the nerve to ask her about her past and her very many, very dead husbands. She didn't kill any of them, probably, but hey, what's important is that they're gone and she's still going strong, growing richer and more powerful by the day.

Every serious player in Night City respects Wakako. Going into a meeting with her is like getting into a cage with a lioness. Sure, the lioness is polite, but you can tell she's already thinking about her next snack. Maybe that's why Wakako's gigs are carried out almost immediately and flawlessly. Wakako takes this entirely for granted.[1]

Wakako in her office