The World of Cyberpunk 2077
Cyberpunk 2077
Viktor Vektor, or Vik for short, is a ripperdoc in Cyberpunk 2077. His clinic is located behind Misty's store in Little China, Watson. Talented, patient, and professional, Viktor has extended V's credit on a number of occasions, but never complains.[1]

Viktor was once a heavyweight boxer in Watson, competing in the Watson Boxing Grand Prix, but eventually came in 2nd place in the finals.[2] He left that life behind, and has come to prefer the relatively straightforward life of a back-alley ripperdoc. He continues to watch boxing matches avidly. His shop sees a steady amount of traffic thanks to a local fixer who insists on outfitting her mercs with the latest implants. He comes to know V and Jackie Welles well over the first six months of their career as mercs.

When V comes to Viktor for implants for an upcoming heist planned by Dexter DeShawn, Viktor accepts an IOU from V and gives them both a grip and a new Kiroshi implant. V is overwhelmed by the unexpected generosity, but Viktor claims it is an investment to make sure that V returns alive to pay off the €$21,000 they now owe him. Should V later return to pay off that debt, Viktor tries to refuse it and argues V can make better use of the cash, but V insists on giving him his due.

After V is brought to Viktor by Takemura following Dexter's betrayal, Viktor has to break the news that the Relic inside V is slowly overwriting their mind with Johnny Silverhand's engram. Worse, as skilled as Viktor is, he has no means of saving V, and can only continue to offer his support as a ripperdoc.[1]

Viktor attends Jackie's ofrenda, and leaves a pair of boxing gloves as an offering, explaining that Jackie was the first person he trained who managed to knock him out in one hit.[3] 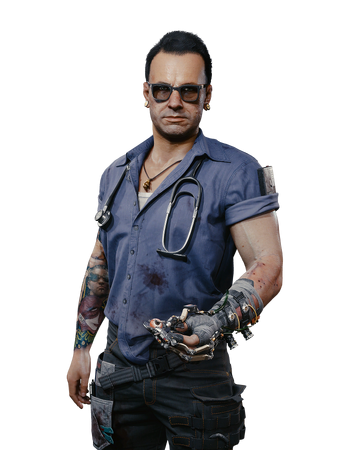 If you want a decent chrome, you go to Vik's. While other places might look like spaceship interiors crossed with zen rooms, his ripperdoc clinic is no-nonsense and doesn't bombard customers with corporate logos. If you're nice, he might even give you a beer with your anesthesia before he starts cutting.

Viktor Vektor is actually one of the living legends of Night City - a fact he's been trying to get people to forget for years. He's a man of principle, an old-school tough-guy from the streets for whom honor and morals were forged in the Night City Devils boxing club.[1]

When technology became advanced, cyberware became common. This is why people in Night City need ripperdocs. Ripperdocs are medical technicians -- half doctors, half engineers. They can patch you up in no time, stitching your gut after it has been slashed open and tending to bullet wounds. And if your tech is broken, they can either fix it or install new, illegal wares. Viktor is a master of both -- the scalpel and the screwdriver. Having been a ringside physician for years, he sure has enough experience.

Viktor in his shop