V is the player controlled protagonist of the video game Cyberpunk 2077. V's gender, appearance, skills and history are all customizable and have an impact on the story.[2]

This part of Cyberpunk 2077 is a deep character customization system. The process starts with the player either selecting a preset character or creating a custom character. When creating a custom character, the player can select a gender and customize their character; customization can include depictions of breasts, buttocks and genitalia, as well as various sizes and combinations of genitals. Options also include picking between a male or female sounding voice, while also adjusting the pitch.[1]

Each lifepath will start in a different starting location in Night City and V will be in a different place in life overall. V will have a different introductory questline, and equipment which will be connected to your specific origin story and will be introduced to the characters differently. Lifepaths will stretch the entirety of the game, and not only will it open up different dialogue options like previously stated, but you will also unlock specific side quests based off your Lifepath.

After the intro questlines are completed, they then lead into a compilation cutscene of Jackie and V sticking together for a while doing jobs before it reaches the starting point of the game. At this point, the game follows a similar narrative path.

The character of V was unveiled at the E3 2018 show, where CD Projekt Red revealed the game for the first time since 2013. Players are going to find themselves in the role of V, an up and coming cyberpunk in Night City. Rather than having a pre-defined character, similar to Geralt of Rivia from the Witcher franchise, CDPR elected to allow players to define their own character.

V will be the handle that all NPCs will refer the player character as, but players will be able to name V with a first and last name. Players will also be able to choose their future path with multiple branching questlines, as well as flesh out their life story (major life event, their reason for going to Night City, etc.), furthering the immersion and role-playing aspects. A broad skill system means that there are no traditional classes, so players are free to experiment with abilities and perks. 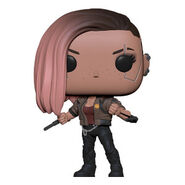 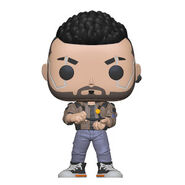 Retrieved from "https://cyberpunk.fandom.com/wiki/V_(Character)?oldid=35302"
Community content is available under CC-BY-SA unless otherwise noted.