Cyberpunk 2077
Tyger Claws killed one girl too many, so people took matters into their own hands...

The Mox are relatively small, non-territorial, and consist of of mostly sex workers, anarchists, punks, and sexual minorities. Formed in 2067 in the interest of mutual self-defense purposes, their name comes from the old slang term "moxie," denoting their determination to stand up against their oppressors.[2] One of their emblems is "Moxes" written in calligraphy.

The Moxes like to wear outfits that are a mix of the punk aesthetic and the inexpensive fashion worn typically by prostitutes, however they usually do not wear clothes that would restrain their movements in any way, leaving them looking more like gangers than your typical sex workers. Some members, especially those who focus on combat, have heavily modified bodies that sometimes evoke a "plastic doll" style, but may also be disguised with RealSkinn. One of their gang symbols is a labrys-a double-headed axe-displayed on their walls, clothes, tattoos, or jewelry.[2] The Mox have their own clothing brand that goes by the name BITCH.

They are based out of Lizzie's Bar in Kabuki, Watson.

The Mox formed during the riots that occurred after the death of Elizabeth "Lizzie" Borden, a well known strip club owner and former prostitute who was fair when treating her workers and even defended them from violent clients.[3]

On May 13 2067, one of Lizzie's girls was brutally raped and murdered by Tyger Claw gangers. Lizzie avenged her by killing three of the assailants with an axe and displayed their bodies in front of her club, proclaiming that the same would happen to anyone else who hurt a prostitute. That night, Tyger Claws raided and demolished her bar before killing Elizabeth. These actions created an uproar that the Tygers could not have foreseen. Lizzie's death set off a wave of protracted riots all over Night City, and Tyger Claws' members and businesses became the main targets of the violence. Those events cemented Elizabeth Borden as a symbol of defiance against gangers' lawlessness and brutality. Her ideological successors commemorated her by rebuilding her place, naming it "Lizzie's Bar," and forming a gang that brought together those who felt threatened and oppressed, especially among sex workers and sexual minorities.

Folk went ballistic. Girls, pimps, outcasts - the whole freakshow. It's how the Mox got started.

The Moxes do not have strict hierarchy. Nevertheless they are a gang, and regardless of the fact that its members refer to themselves as "those who protect working girls and guys" from violence and abuse, they demand substantial fee from their charges. They also run several smaller brothels where they profit from prostitution.[2]

Most of the Moxes' income is generated by Lizzie's Bar, which is now an exclusive braindance club. They do not control any contiguous portion of Night City, focusing instead on protecting their facilities, members, and sex workers who operate in the vicinity of Lizzie's Bar. As long as they are left to their business, they do not actively seek confrontation with other gangs, although have tense relations with the Tyger Claws, who continue to test their patience and combat capabilities.[2]

The youngest established gang in Night City. Its beginnings date back to 2067 when the murder of a sex worker sparked riots that lasted days. The gang formed out of the protesters attracted many others to its ranks for years after.

The Mox is a motley crew of current and former sex workers, punks, freaks and all kinds of outcasts. The gang's main headquarters is Lizzie's Bar, a braindance club that serves as the Mox's main source of income.

The gang's aesthetic is characterized by aggressive kitsch, loud colors, plastic and latex.[4]

Everybody loved Lizzie's, the strip club run by ex-prostitute Elizabeth "Lizzie" Borden. Lizzie was known for treating her employees fairly and defending them from violent clients—and thus for having the most attractive and skilled dolls in the business. When she took an axe to a Tyger Claw for having raped one of her girls, his gang took revenge, killing her and demolishing her club. Lizzie's was no more, but the riots and protests that followed the club's demise gave birth to The Mox, a gang of sex workers, sexual minorities, punks and anarchists who found the "moxie" to fight back. The Mox's attire and iconography combine elements associated with prostitution and a fetishized form of femininity with skulls, axes, spikes and other death-and-violence paraphernalia. As their mottos proudly proclaim, sex and killing are at the core of who they are. When you cross them, they transform from sweet angels of pleasure to cold-blooded, long-legged killers in the blink of a perfectly mascara'd eye. The cyberware that appears on the surface designed to service client fantasies actually serves to overclock their bodies into fast-moving, bulletproof killing machines.

Evelyn Parker, a former member of the Mox in Lizzie's Bar 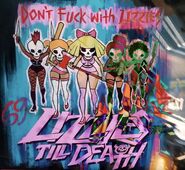