The Glen is a sub-district of Heywood, Night City in 2077.

During the Rebuilding period, right around the time Night City made a deal with the corporations to aid and fund the city's reconstruction, the Glen was planned as the new seat of power for the city state and central government.[1] The state owned district is rich, clean, and mostly crime free.

Bordering with Corpo Plaza is Reconciliation Park, a tidy and pleasant park surrounded by elegant architecture, while directly behind it is the newly built City Hall.[2]

Not far from City Hall, things in the district look much worse. This is the turf where the Valentinos and 6th Street gang rule. As the buildings get more dilapidated, it's impossible to ignore the clear correlation between their quality and societal wealth and class.[3]

Rewind a few decades back and Night City Council was on its knees begging corporations to help rebuild the city. The Glen became home to the new City Hall. It's no surprise then that the Glen feels much safer and organized than other districts, with millions of eddies invested on every corner. Reconciliation Park promises a literal breath of fresh air, while the elegance of the surrounding architecture reminds you that the bustle of Night City is never out of reach. City Hall is the main attraction of the Glen and the seat of the city's mayor. But venture away from the tidiness and sophistication, and you'll quickly start noticing run-down buildings and the menacing faces of the Valentinos and the 6th Street Gang. You won't get that in tourist guides. Still, the very fact that there's such a drastic social and economic difference only a few blocks away from City Hall says a lot about how the city is run.[2]

This sub-district includes the next fast travel points:

The Glen is Night City's government district, home to and owned by City Hall. A quick glance at the illustration of this seat of municipal authority compared to those of corporate headquarters should tell you what you need to know about the relative distribution of wealth and power. Then-City Councilman Lucius Rhyne's deal with Arasaka in 2070 gave Night City its independence from the countries around it, but at the price of ceding much control of the city itself to corporations, Arasaka first and foremost. The transfer of power was physically reflected in the rebuilding of Corporate Plaza, which forced City Hall out of the center and into this less than prime piece of real estate. Its northern edge, that closest to City Center, verges on tolerable and even attractive. A peaceful park borders a row of elegant skyscrapers, and behind them, City Hall itself. Heading south, however, the Glen quickly becomes impoverished and crime-ridden. It merges into Vista del Rey, where the Valentinos are the true rulers of gritty, though colorful, streets. For the adventurous, or just those with few choices, there is still fun to be had, but overall life is nasty, grim and short. 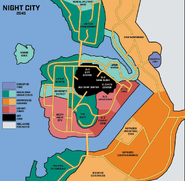