Cyberpunk 2077
T-Bug, also known simply as Bug, was a netrunner in Cyberpunk 2077. She was an acquaintance of Dexter DeShawn, and had also worked with V and Jackie Welles.

As for netrunners, it's hard to find someone more pro than Bug. Her consistency and persistence have brought her respect and trust in the field. As the mercs say: if Bug can't do it, who can?

In 2077, V and Jackie Welles occasionally work with T-Bug on several minor gigs as they settle into their careers as mercenaries. T-Bug provides vital assistance during the job that brings them to the attention of fixer Dexter DeShawn, the rescue of Sandra Dorsett.[1] Dexter brings on T-Bug first, since they already have some experience together.[2] When V meets with Evelyn Parker, Dexter's client, and Judy Alvarez to analyze a braindance of Evelyn's memories of Yorinobu Arasaka's hotel suite, V insists that T-Bug participate in the braindance to lend her expertise. Judy is initially wary of allowing such an intrusion, but eventually concedes. After the braindance, T-Bug shares what she learned about the hotel with Dexter.[3] T-Bug is present for the final face-to-face meeting with the crew before the heist.[4]

T-Bug is killed during the heist of Konpeki Plaza after Yorinobu Arasaka has the hotel placed on lockdown due to the death of his father, Saburo.[4] The Arasaka subnet was able to quickly detect T-Bug and remotely fried her brain. Her body was later found in her apartment, with her nervous systems fried.[5] 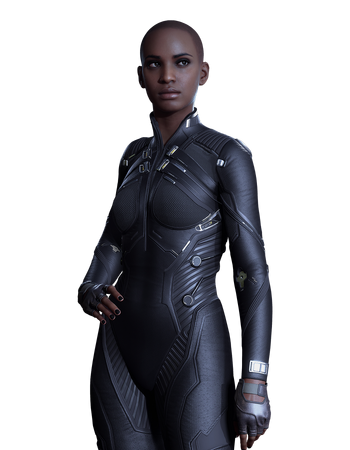 T-Bug is a textbook example of how solos and netrunners really aren't all that different. Both take on risky contracts that usually end in dust-ups with corporations or the law, ever walking the tightrope between life and death - after all, black ICE isn't any less dangerous than taking a bullet. T-Bug's well-aware of this fact, and as a legit specialist in her field, she's fully within her rights to be picky about her contracts. Unlike more reckless netrunners, T-Bug intends to sail into retirement age, preferably with enough eddies to leave this goddamn city behind for good.[6]

T-Bug first appeared in the Cyberpunk 2077 E3 2018 trailer, where she is shown remotely killing an Arasaka employee.

She later played a small role in the Cyberpunk 2077 48-minute gameplay reveal, in which she helps V locate Sandra Dorsett in the mission Breaking Through.

In the E3 2019 cinematic trailer, T-Bug is shown helping Dexter Deshawn in shutting down V's cybernetics after his botched job, where Jackie is killed. T-Bug has the ability to hack people's cyberware, and can hack V because they were hooked up in one network earlier. T-Bug herself is presumably killed after V manages to resist her hacking attempts and shoots her in the face. This scenario is not depicted in the final version of the game, as T-Bug is killed during the heist itself and thus does not appear at the post-heist meetup with Dexter.

Killed a man over the Net 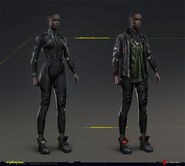