Spider Murphy was a known netrunner from the Cyberpunk 2020 game setting, also appeared briefly in Cyberpunk 2077 assisting Johnny Silverhand, Shaitan and Rogue in the bombing of Arasaka Tower in 2023.

You guys who live in Realspace; you move so slow. Me I like Netspace. It moves fast. You don't get old, you don't get slow and sloppy. You just leave the meat behind and go screamin'. First system I ever hit, I think they had some weeflerunner playin' Sysop for them. I burned in, and jolted the guy with a borrowed Hellbolt, and did the major plunder action all over the Data Fortress. Somewhere out there is a guy with half his forebrain burned out. I wonder if they ever found the body. I wonder if they'll find mine the same way...
- Spider Murphy, Cyberpunk 2020

Spider Murphy was generally accepted as being one of the best netrunners in Night City. Her quotes and stories were often shared with the same reverence as those from other legendary netrunners like Rache Bartmoss, Frack and Edger.

Spider Murphy's first cyberdeck was a Hitachi-Radio Shack 95, which she used to hack into a Zetatech sales office - from there. She falsified an order data to have Zetatech send her a new Parraline 5750A deck.[1]

Spider Murphy was much more skilled than other top-level corporate or mercenary netrunners. She used a completely custom cyberdeck that was faster and more secure than decks used by other top-level runners.[2] She tended to use utilitarian and non-lethal software, in contrast to Bartmoss who liked to use flamboyant and deadly programs.[2]

The book Rache Bartmoss' Guide to the Net was edited and compiled by Spider Murphy; the text contained interjections and clarifications from Spider Murphy as well.[3] The book was so popular even in 2077, it was sold in many bookstores all over Night City.[4]

Spider Murphy was fond of quoting famous and well-known philosophers and public figures.[3] She is also known to sometimes use the image of a well-endowed anime girl as her net icon.[2]

In 2023, during the Fourth Corporate War Spider joined Johnny Silverhand and Rogue on the assaults of Arasaka Tower. 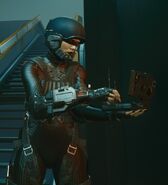 Spider Murphy, as remembered by Johnny Silverhand in the Arasaka Tower raid of 2023

Retrieved from "https://cyberpunk.fandom.com/wiki/Spider_Murphy?oldid=83944"
Community content is available under CC-BY-SA unless otherwise noted.