Cyberpunk 2077
Saul Bright is the leader of the Aldecaldos group that roams the Badlands around Night City.[1]

Saul came into leadership of the group when they went into a fragile state, so bad that one mistake may cause them to lose everything. Saul began to feud over a deal to work with Biotechnica with another Aldecaldo, Panam Palmer, to the point where she left the family to become a solo in Night City. Panam eventually returned and went behind his back to help her ally, V. Saul was furious and confronted her about her choices.

Saul was eventually captured by Wraiths, a group of Raffen Shiv, but was saved by Panam and V. Saul was thankful but was still tense with the two, but they put their differences aside in order to survive. Saul reluctantly welcomed her back into the Aldecaldos. Panam and her friends eventually attacked a Militech shipment in order to steal a tank to defend themselves from the Wraiths. Panam returned to Saul, expecting to be banished for doing so against his orders, however he was moved by her devotion to help the family while recognising his own mistakes, and made her co-leader of the Aldecaldos.

If V chooses to ally with Panam to get into Mikoshi:

Saul agreed to help V get into Arasaka Tower, wanting to also use it as an opportunity to pillage it for resources. Saul happily announces V as a member of the Aldecaldos. The following day, Saul, Panam, and V fight through into Arasaka Tower, but upon reaching the entrance to Mikoshi, the trior are intercepted by Adam Smasher. Saul is knocked to the ground but manages to shoot Smasher with his shotgun, destroying his chestplate. In retaliation, Smasher stomps on Saul's head, killing him instantly. The remaining two survive and Panam assumes full leadership of the Aldecaldos.[2] 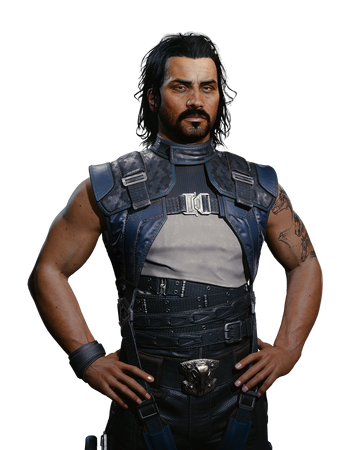 Head of the Aldecaldo family that also counts Panam among its members. After becoming a leader he broke away from the clan's traditions of smuggling and tried to establish corporate connections, which didn't exactly go down well back at the camp. The truth is, Saul became leader at a very difficult time when any strategic slip could tear the entire family apart. He's always tried to do the right thing and never denied responsibility for his own choices.

Uncompromising, stubborn, bold and principled - he commands a kind of reluctant that's usually reserved for the most righteous, and thus - unbearable.[2]