Queen of fixers
Queen of the Afterlife

Cyberpunk 2013
Cyberpunk 2020
Cyberpunk RED
Cyberpunk 2077
Rogue Amendiares was a former solo who had gone on to become the best fixer in Night City. She owns the famous Afterlife nightclub.

Rogue was a rebellious teen, knew stiff hierarchy of gang life was not for her and set out on her own, to become a solo. She was a new and successful mercenary in Night City. Rogue also began a relationship with hit rockerboy sensation Johnny Silverhand. Rogue on occasion asked Johnny if they could visit a drive-in theatre on a date, which went largely ignored.

Her relationship with Johnny ended at some point in 2011,[4] after Rogue found out about Johnny cheating on her.[5]

In 2013, Rogue and her partner Santiago were mercs, being reputed to be the best at the time. During a meeting between the two of them in the Atlantis Club, Johnny Silverhand interrupted them by entering the room to ask for their help in raiding Arasaka to save his girlfriend Alt Cunningham. While Rogue was still held a sour spot for Johnny she ended up agreeing along with Santiago for nothing more than to give it to the corporations. The two participated in Silverhand's raid on Arasaka Tower to recover Alt and the Soulkiller program alongside a media known as Thompson.[4]

During the Fourth Corporate War, Rogue participated in another Arasaka raid that would come to be known as the Night City Holocaust. Her alongside Spider Murphy, Shaitan, and Johnny Silverhand raid the tower from the roof to leave a mini nuke within. However Johnny had other plans and asked Rogue to accompany him, she refused and only promised to wait longer for him to escape. After attempting to bring Johnny onboard the chopper, they were intercepted by Adam Smasher. Rogue left Johnny behind as the Arasaka Tower was destroyed.

By 2045, she had largely retired from the solo lifestyle, and now operated the Afterlife, although she still held court with local Solos and acted as a middleman with potential contacts.[6]

By 2077, Rogue's reputation as a solo continues to inspire and influence others. As the "Queen of the Afterlife", she is regarded as Night City's top fixer.[3]

In her younger days she was a professional merc - today she's the queen of fixers. One of the last legends of Night City who's more than just handed-down stories. Unlike her friends from the good ol' days (read: Johnny Silverhand), Rogue does more than get by - she runs the Afterlife and by definition almost the entire Night City merc network. Every serious job needs her thumbs up, and V's mission to find Anders Hellman is very serious indeed.[3]

Rogue is one of the OG cyberpunks, kicking ass since before 2020, still doing it in 2077. She first made her name as a solo and it shows: she's tall, strong octogenarian that's a better shot than you and, yes, even a better lover than you. As a rebellious teen, she knew stiff hierarchy of gang life wasn't for her and set out on her own, pioneering the role of the do-it-all and do-it-alone merc. Than she ran into Johnny Silverhand, the milieu's rising star. Their intense romance endured twists and turns before ripping apart in a violent and spectacular fashion. After Johnny's death, Rogue hung up her weapons and moved out of the direct line of fire, using her contacts to became a fixer, the role in which V comes to know her. V can't help but be impressed and a little awed by this star cyberpunk, even though others from her era smirk that she sold out and became a glorified corporate matchmaker. One way or the other, for V to achieve her goals, winning Rogue over (with Johnny's help, of course) is a top priority.
CURRIT, T. The Official Digital Artbook of Cyberpunk 2077. Digital, Online. CD Projekt RED, 2020. 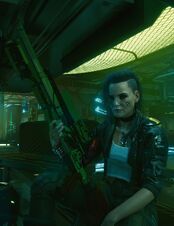 Cyberpunk 2013 Book
Add a photo to this gallery

Retrieved from "https://cyberpunk.fandom.com/wiki/Rogue_Amendiares?oldid=84440"
Community content is available under CC-BY-SA unless otherwise noted.