Cyberpunk 2077
River Ward is a former NCPD detective in Night City. He is also a possible romance option for V.

Growing up, River and his sister Joss' parents ran a small farm but like many small farms, it eventually went out of business as larger corporations took over the farming process. In turn, his parents took to running a grocery store and the family of four lived in the apartment area above it.[1]

One day, some drugged up thugs broke in looking for cash and, when they didn't find any in the store, went into the living quarters and demanded money from the father, who swore they didn't have anything else. Not liking this response, one of the thugs killed River and Joss' father and then put a gun in River's hand and had him point it at his own mother's head, demanding he shoot and kill her. River stalled, terrified, to the point the thug gave up trying to bait the child and took the gun and killed their mom himself before the thugs ran off, leaving River and Joss alive but now parentless. The siblings were then sent off to an orphanage to be cared for but the NCPD never caught the thugs who killed their parents. With this lack of justice, River saw this as complete incompetency regarding the NCPD and made it his goal to become a detective to solve cases like what happened to his family.

Sometime prior to 2077, River had become an NCPD detective and was first partnered with Jamie Sheen, but Jamie later committed suicide over his frustration with how the top brass cared more about bribes rather than upholding the law. River continued serving as a detective though and sometime later was partnered with another detective, Harold Han, and even worked with well-established people like Jefferson Peralez.

Meanwhile his sister, Joss, had married an Aldecaldo with whom she had three children with: Randy, Dorian, and Monique. With his brother-in-law not being much of a father figure, River would step in and help take care of the children, particularly when he once caught his brother-in-law with one of his young sons, Dorian, at a dive bar in the middle of the night, so the detective took his nephew home much to his brother-in-law's ire. When his brother-in-law later died, River continued to try and help support Joss and her children like buying them a new trailer to live in, which resulted in Randy taking over the old one as his own place. However, River and Joss eventually had a falling out sometime before 2077 over River's driven desire to bring justice for his victims' cases to the point it was all he could talk and think about, with little regard for his own family issues.

At one point in 2077, he got a solid tip that Mayor Lucius Rhyne's life was in danger and had set out to speak with the mayor's security when a cyberpscyho, Péter Horváth, attacked right after River got there. River managed to incapacitate the would-be attacker before they could find and kill the mayor and the deputy mayor, Weldon Holt, but Rhyne ended up dying anyways later that day from a separate heart problem. This odd coincidence didn't go unnoticed to River, but he had no way to really link the two incidents, especially as his superior ordered him to drop the case and even his partner, Harold, warned him to not re-open it.

If V completes I Fought the Law:

River got a call soon after from V, who was being tasked by the Peralezes to find out what really happened to Rhyne as they had their own suspicions about his untimely death. Together, River and V tracked down the Red Queen's Race, an invitation-only sex club that Rhyne had visited on the night of his death. They learned that Rhyne had died in the club from a virus-spiked braindance, and Deputy Mayor Weldon Holt had ordered Detective Han to cover it up. While V reported the findings to the Peralezes, River decided to try to re-open the inquest into Rhyne's death. However, when he confronted Han about his own actions in the coverup, he was told once more to drop it. Undeterred, he decided to take it up with his superiors but ultimately got suspended from the force instead.[1]
While still suspended, he came to believe that his missing nephew, Randy Kutcher, had been abducted by Anthony Harris, the man behind the "Peter Pan" child abductions, after seeing a video where Anthony was being chased by NCPD before being shot while one of his newer victims in the video had Randy's shoes on. However, while Anthony was still alive, he was comatose, preventing the NCPD from determining where his other victims were kept. Dismayed that the Peter Pan case was assigned to Detective Gonaghal, who was unlikely to pursue it seriously, River asked V to help him so that he could rescue Randy, conveniently leaving out that he'd been suspended from the force.[1]
If V agrees to help with The Hunt:

Together, they infiltrated a NCPD-contracted medical lab in The Glen which had been experimenting with scrolling braindances of dreams for therapeutic and investigative purposes, hoping to examine any braindances of Anthony's dreams. They were confronted by Dr. Yawen Packard, a longtime friend of River's, who revealed that Anthony was not dreaming due to his condition. With no other leads, River decided to break the news that Randy had been abducted to Joss and search Randy's room for clues to his whereabouts leading up to his disappearance, as well as any sensory stimulus that could be used to make Anthony dream. They found Randy had a new laptop and had come into contact with Anthony through a secret website hidden on a false website for people looking to kick their drug abuse habits. Thanks to a cartoon that Randy had downloaded from the site, Yawen was able to trigger Anthony's dreams.[1]
If not enough clues were found and guessed the wrong farm:

Unfortunately, despite River and V working together, they weren't able to locate the right farm in time and failed to rescue Randy, who ended up dying.

If enough clues were found or guessed the right farm to locate Randy but V abandoned the search:

With V's help, River was able to deduce that Anthony must have been using Edgewood Farm to hold his victims, but V chose to not go any further in assisting River. In turn, River headed out on his own to rescue Randy but, ill-prepared for the defenses Anthony had set up around the farm, he was summarily killed and wasn't able to save Randy.

If enough clues were found or guessed the right farm to locate Randy and V didn't abandon the search:

With V's help at analyzing the braindances, River was able to deduce that Anthony must have been using Edgewood Farm to hold his victims. The two set out to the farm, which was now heavily armed, but managed to get through the defenses and rescue Randy and several other victims that Anthony had been force-feeding and injecting with hormones via equipment designed for livestock.
While they'd managed to rescue his nephew, River still felt that Anthony should die for what he did to all his victims. With this in mind, he went to the hospital where the comatose murderer was being kept and put his gun against the man's head, intent on killing him. As he stood there though, he had flashbacks to his childhood when the thug tried to make him shoot his mother and realized he'd be no better than that thug if he went through with the execution. With that, he left the hospital, letting Anthony live. A short time later, River invited V over for a dinner with his family.
If Following the River is completed:

As V and River hung out together, River eventually revealed to V how he decided to not kill Anthony, explaining what happened to his parents that ultimately made up his decision to not go through with it. The two enjoyed the rest of the night having dinner with his family and playing games. As the night winded down, River then handed V his revolver, Crash, noting it carried too many bad memories for him.
If playing a female V and V takes him up on his offer:

River then revealed the real reason he pulled V away for a private conversation was that he was interested in her. After some banter back and forth, the two then headed back to his room for some more intimate alone time.

Knowing his time with the NCPD was at an end, River decided to become a private investigator instead and began to work out the plans to do so, deciding he'd like to specialize in kidnapping to help other families like what happened to his.[1]
If River was romanced and The Star ending was chosen:

Not wishing to abandon Night City's citizens, whom he still felt the need to protect, River and V parted ways as V left with the Aldecaldos. 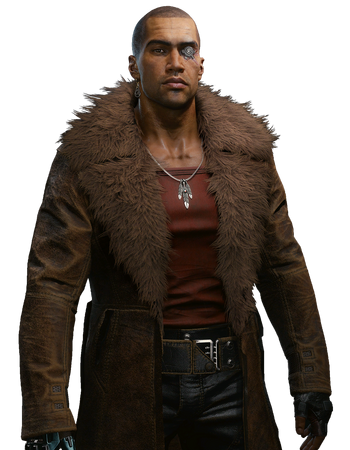 River Ward thought that nothing could top becoming an NCPD detective - that things could only get easier from there. Well, turns out that always doing the right thing in Night City is harder than just getting a title. Every day for River is a moral struggle - either he plays the game, or he gives up a slice of his soul. If he lets his guard down for even one second, some ganger will get the best of him. In spite of all this, River shows up for work every morning with a can-do attitude. Maybe it's his way of coping, or because he doesn't know how to do anything else.[1]