Richard Night was born in Pasadena, California, and was the second of five children. His parents were both researchers at Caltech - specializing in materials science. Night showed an aptitude for engineering at a relatively young age, but when a joint venture with his college roommate - Romney Zukarian - turned sour, an angry Night shifted his major from engineering to business financial investment. Armed with his new knowledge of the ins and outs of business, Night soon regained his company from his old rival.

Applying his backgrounds in engineering and investment, Richard soon founded - along his new colleagues - Halsey, Ferris, and Night, a development company specialized in using advanced construction techniques to build massive mega-projects such as office complexes, airports, and even small cities. HFN was wildly successful in the years before the Collapse, leading to the construction of many large model communities around the world, and making all three partners very wealthy men.[2][3][1]

At some point he married Miriam Night.

By the 1990s however, Night was concerned by the violence and disruption of the impending Collapse. Additionally, working mainly on corporate-funded projects soon started not to be enough for him. Seeing himself in an uniquely position to deal with the problem, Richard started a side company known as Night International, and began to plan an ideal new city — an environment that would be controlled and would be ultimately safe from the ravages tearing the world apart. His new city would be completely planned, self-sufficient, and capable of holding off even the most determined marauders. It would boast planned neighborhoods dedicated to preserving the feel of different types of nationalities and cultures, as well as a super-modern corporate center that would stand as a shining beacon of enlightened capitalism. It was ambitious, far-reaching, and visionary in its approach. A city so grand that all other cities built before or after would pale in comparison.[3][1]

His next move was to secure the unheard amount of capital needed to finance the gargantuan project. Luckily for him, history and the forces of a collapsing society worked on his side. With the Collapse, many corporations were looking to establish their own urban areas - controlled zones free of crime, poverty or debt. A place where governments would be corporate-run, allowing optimum zoning and no anti-business elements to interfere with corporate growth. Ideally, it would be a capitalist mecca of opportunity. Night's dreamed city was tailor-made for their purposes and so he provided the design and construction capacities they didn't have, and the corporations lend the raw cash. By 1992, Arasaka, EBM and Petrochem had all signed on with Night, and all that was left was to find the ideal location to build this utopian city.[3]

Richard was going to need a lot of land for his new infrastructure development, as well as access to both ocean ports and modern highways to deliver the huge amount of materials that he would need to construct it. He sent scouting teams to scour the East and West Coasts of the besieged United States, but in the end it was a small article in the San Francisco Chronicle that caught his eye - an article describing an incident of post-holocaust horror that had taken place in a small town called Morro Bay, along the Central Californian coast. Now a ghost town, Night was able to buy the remnants of Morro Bay for pennies on the dollar. He was also aided by Petrochem, who had taken over the now-abandoned Dynergy power plant in the town and was already planning to set up an offshore port and oil terminal site.[1] A leveraged 132 million dollar purchase secured the remaining parcels.[3]

Bankrolled by Merrill, Asukaga, & Finch - who wanted to make the new city a financial hub - Night and Petrochem hired Arasaka to clean out the boostergangs and make the area "safe" again. Further funds came from external (and somewhat shady) investors lured to the project by the promise of lucrative building contracts and possible sources of extralegal income. To avoid the stigma of the Morro Bay Massacre, the partnership renamed the area Del Coronado Bay, the site of their new utopia of Coronado City. However, thanks to the rather out-sized personality of its founder, Coronado City soon became colloquially known by locals as "Night's City."[1]

By 1993, Coronado City needed more space than what it was in the original geology of the bay, so Night leveled the surrounding hills and dumped them into the ocean as fill, reshaped the bay, and also re-dredged the harbor making it capable of porting the large ships needed to build the city. Moreover, the region was an ideal location for a station of the Planetran intercontinental maglev.[3][1]

Coronado City truly reflected its creator's eclectic vision. Instead of a huge construction of steel and glass, Night's urban plan broke the new city into a series of neighborhoods, each with a different architectural style and theme, much like the original Disneyland park's various "lands". In addition, Night also paid homage to the late and lamented small hamlet of Morro Bay by recreating much of the original layout of the area in an open-air environment reminiscent of a seaside village called Old Downtown. The city and corporate centers were the glittering zones of high-rises and corporate parks. It was here that Richard Night showed off his personal architectural skills in the designs of the many corporate "starscrapers" that were the most visible sign of Coronado City's rising affluence. Night's vision was indeed expansive and truly visionary. The only catch came when he started to build it in May 1994.[1][4]

Although Petrochem and MA&F were the major bankrollers for the Coronado Partnership, they had one disadvantage: they weren't construction companies. For a job like Coronado City, the Partnership was going to need someone who could bring in the machines and workforce to actually dig the holes and put up the steel. They eventually ended up with the mob.[1]

The West Coast Mobs (the Mafia, the Yakuza, etc.) had maintained a stranglehold on heavy construction on the "left coast" for decades. They controlled the construction unions, the transport unions, and most of the governmental agencies in charge of construction licenses, environmental impacts, and other building necessities. By investing a not inconsiderable sum in the Partnership (through a series of shell corporations), the Mobs hoped to not only make a staggering amount of return on lucrative construction work, but also have the inside track on future gambling, prostitution, and drug franchises in the new city. However, Night's visionary plan required using his own advanced building techniques and materials, which excluded a number of established unions and construction firms controlled by his organized crime partners, including his old associates - now called Halsey, Ferris, and Skiv - who were short on money and had unwisely joined with the local mob. This didn't make any of them happy, and Night's further insistence that his new city would be safe and crime free angered them even more.[3][2][1]

During the first four years of construction, there were daily threats against Night's life. A proud and self-reliant man, Richard typically ignored them. When the threats escalated to the level of sabotage and intimidation, he called in his corporate partners, who dealt with the issue swiftly and ruthlessly. Eventually, Night's luck ran out. On September 20th, 1998, he was shot and killed in his penthouse suite at the top of the newly constructed Parkview Tower. Night's killer was never apprehended, and in his memory, the newly appointed City Council officially renamed Coronado City as "Night City" in his honor.[3][1]

The mob bosses who killed Richard Night ruled over Night City during the following years. Eventually, though, the corporations took the city back after business between both groups didn't end well.[1]

Miriam Night used the money of her late husband to build Night Corp - former Night International - from the ground up and structure it around Night's ideals and principles.[4] 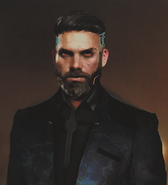