Cyberpunk 2077
Regina Jones is the main fixer of the Watson district in Night City. She can be found at her own base of operations in Kabuki.

Regina formerly worked as an independent reporter for FTF Radio, but after the station was acquired by N54 News, she struck out on her own. Using her extensive network of contacts, Regina quickly remade herself as a fixer. She tends to inject her own principles into the gigs she hands out, sometimes asking mercs to seek nonviolent ways to complete their work and offering bonuses if they comply.[1] 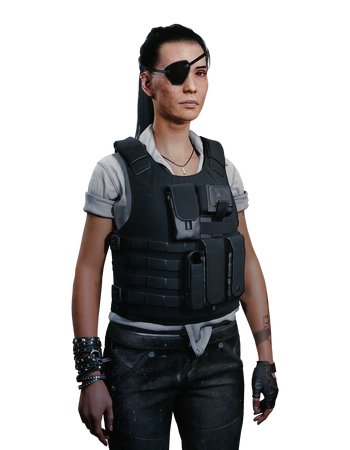 A fixer with Chinese heritage operating out of Watson. She used to work as an independent reporter for FTF Radio, but after the station was acquired by the media conglomerate News 54, Regina decided it was time to find a better medium to spread her message. She mobilized all her contacts - from the highest-ranking corpos to the lowliest dealers, gangers, mercs, bums and junkies. From their point of view, Regina hasn't changed a bit - she's always been a fighter, a girl from the streets. The only difference is that before she bought gossip and sold news - now she spins both.[1]