Cyberpunk 2077
Because I truly care this time. Yet I fear I'll do or say something foolish - and be left alone in the desert.

– Panam during With a Little Help from My Friends, Cyberpunk 2077

Panam Palmer is introduced as a former member of the Aldecaldos nomad clan, who, after a family dispute, decided to live a more independent life as a mercenary. She is also a possible romance option for V in Cyberpunk 2077.

Panam Palmer was part of the Aldecaldos nomad tribe who had traveled to the Badlands outside Night City. Her best friend was captured by the Raffen Shiv when they were a child, only to be saved by Cassidy Righter. This incident deeply affected Panam into her adulthood, to the point of never telling anyone what happened in order to forget about it.

However, she didn't see eye to eye with the clan's leader, Saul Bright, who was trying to strike a deal with Biotechnica in his attempt to keep the clan alive with consistent work and which Panam disapproved of, believing the clan should remain independent from corporations. This came to a head when, due to her rebellious attitude, she eventually left the clan and moved to Night City. Working as a mercenary under the fixer Rogue, Panam was often paired with nomad Nash Bane on a few gigs, though she was unaware he was Raffen Shiv. Despite moving away, Panam maintained communication with members of the Aldecados, including her close friends Mitch Anderson and Driss "Scorpion" Meriana.

During an assignment to deliver "merchandise", Panam was betrayed by Nash, who stole both their cargo and her Thorton Mackinaw "Warhorse". Having messed up, she angrily confronted Rogue at the Afterlife, leaving without compensation or help to recover the stolen items. Some time later, Panam was contacted by a local merc V, who had been directed to her by Rogue to help recover Anders Hellman. After helping her recover her car and merchandise, she agreed to help them capture Hellman from Kang Tao forces, whose AV was predicted to pass across the Badlands.[2]

Planning to ground the convoy with an EMP, Panam and V stormed a corpo powerplant and modified the systems into an EMP. When it failed to stop them, she used a rocket launcher to ground the vehicle. After pursuing the convoy and recovering Hellman, Panam left with the Aldecados, going separate ways with V.[3][4]

Some time later, Saul Bright disappeared with a small convoy of Aldecados. Learning of the attack, Panam returned to the Aldecados to help investigate. Eventually, they discovered the convoy had been ambushed by Wraiths and Saul had been captured. To help rescue him, Panam contacted V and asked for their assistance.[5]

Meeting at the Aldecado camp, Panam was able to convince V to help. With intel provided by Mitch, she provided cover whilst they infiltrated the gang's lair. After V rescued Saul, Panam drove the group away, using a sand storm to cover their tracks. Seeking shelter in an abandoned farmhouse, the group spent the night until the other Aldecados, during which she decided to rejoin them. Afterwards, Panam left with the Aldecados, given V her rifle Overwatch in return for their help.[5] 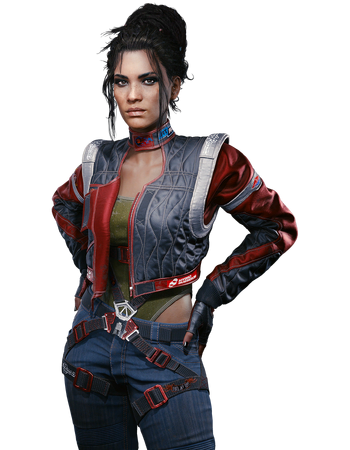 Panam is a nomad - although, maybe "ex-nomad" rings truer these days. She locked horns with the family's leader, Saul, left Aldecaldo nation and moved to Night City to try her luck as a merc. Panam's life is at a crossroads - on one hand she knows her life needs a change, it's now or never. On the other hand, burning bridges with the nomad family where all her friends are might have been a bit drastic. On top of that, Night City doesn't take too kindly to nomads or have patience for people like Panam who are internally conflicted and dream of a brighter future.[6]

Introduction with a borrowed Thorton 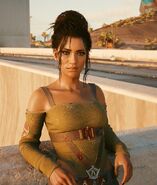