Rache Bartmoss Guide to the Net
The World of Cyberpunk 2077

Cyberpunk 2020
Cyberpunk 2077
NetWatch was created as part of a unilateral agreement in the UN treaty. It is empowered to protect and serve the law abiding citizens of the World Communications Network ...
- The NetWatch Story, A DMS Production, Cyberpunk 2020

Netwatch is a policing organization based out of London, England. Its focus is the protection of the Net Over Europe and the United States. They work closely with corporations and often fight against Netrunners.

NetWatch is a policing organization founded in 2013 in a joint US/Eurotheatre treaty, created as a part of a United Nations treaty. It worked in tandem with, and received funding from governments, corporations, and other large organizations to patrol the Net looking for illegal activity. NetCop netrunners were equipped with very powerful software to move through the Net, and would patrol specific "beats" that could cover a city, region, or continent. While arrest was the primary goal of NetWatch, it was also known to use black programs to kill or maim their opposition.[2]

By 2077, one of NetWatch's goals included keeping people from penetrating the blackwall: a virtual wall believed to keep free A.I.s from breaking through and causing mayhem. As such, they were at odds with the Voodoo Boys, who wished to break down the blackwall with the belief that the A.I.s would help them and humanity itself.[3]

In the original Cyberpunk 2020 lore, NetWatch was formed in 2013 through a treaty between the United Nations and the World Communications Network. In Cyberpunk 2077, NetWatch had been rewritten to be a pre-existing United Kingdom security company founded in 1991, made into a worldwide policing agency through the US/Eurotheatre treaty in 2013. 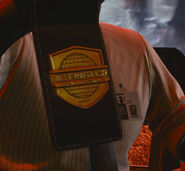 NetWatch Badge
Add a photo to this gallery

Retrieved from "https://cyberpunk.fandom.com/wiki/NetWatch?oldid=72482"
Community content is available under CC-BY-SA unless otherwise noted.