View source
Our community needs more information on this page! Can you help out? Click here to add more.

Cyberpunk 2077
Some believe uncertainty is an evil that should be dispelled through divination. Others claim it's change that is evil. But that isn't true either. Every minute of every day, we each become someone new. We shouldn't fear change itself, but only who we might change into. Knowing one's path is most important.

Misty Olszewski is a new age spiritualist and the owner of Misty's Esoterica, a store located in Urmland Street, Watson. She is a good friend of Viktor Vektor and V, and the girlfriend of Jackie Welles.

Misty grew up in Night City's Heywood District, and was a childhood friend of Jackie Welles.[1] When she was a young adult, Misty opened her own shop in Littla China, Watson - called Misty's Esoterica.

At some point she was approached by ripperdoc Viktor Vektor, whom rented a basement she owned, behind her shop, to use as a clinic. Since then both became close friends. Not long after, Misty regained contact with Jackie, and in 2076 they entered into a relationship, however Jackie's mother was not supportive of the relationship, preferring a previous girlfriend of Jackie's.

In late 2076, Jackie introduced V to Misty and Viktor, who then became friends. 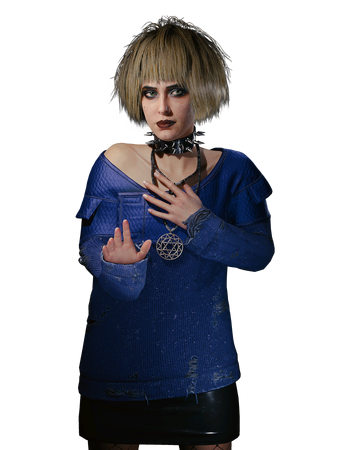 While Viktor is a healer of bullet and blade wounds, Misty is a mender of broken spirits. Misty's Esoterica, a small shop in front of a ripperdoc clinic, is stocked with an assortment of aura-cleansing incense sticks, yarrow stems, Tibetan "Book of the Dead" shards and pendants for good luck. Though Misty gets more costumers than Viktor, this smart and sensitive woman somehow always finds the time to help her friend in difficult moments - at times almost taking on the role of a full-fledged nurse.[2]

Misty and her tarot cards