Cyberpunk RED
Cyberpunk 2077
I remember the day my whole world changed. I kind of knew in a vague way that there was a war going on, but it was very remote. My father never wanted to talk about it. And then, suddenly, my father was gone, my world was gone, the City I'd grown up in was gone — everything was gone. And it was all our fault.[4]

Michiko Arasaka (荒坂 美知子; or Michiko Sanderson) is the head of the Hato faction of the Arasaka Corporation and founder and CEO of Danger Gal. Unlike the rest of her family and corporation, she allied with the US government after the Fourth Corporate War.[4] Michiko Arasaka is the daughter of Kei Arasaka, and granddaughter of Saburo Arasaka.

Most of her life was kept secret from the rest of the Arasaka family, especially her grandfather Saburo. Born in the NUSA, she held a dual citizenship for both Japan and the NUS, however her descent is pure Japanese. She also had access to many assets of the Arasaka Estate and a bodyguard, Kenichi Zaburo, one of Arasaka's top solos and her personal bodyguard since she was four.[4] By 2077, Michiko was on the board of directors of the Arasaka Corporation.

Michiko Arasaka was born in 2008 in Night City, within the United States. Her father Kei Arasaka married a woman of Japanese descent who was an American citizen. Due to Kei's status in the Arasaka Corporation, he believed it was dangerous to leave them alone in case others would try and kidnap them. Because of this he kept his family in Night City secret to avoid them becoming a target, Kei also wanted to avoid Michiko from meeting her grandfather Saburo who would be displeased that his granddaughter was half-American.

At the age of four she was assigned a personal bodyguard - Kenichi Zaburo, a highly trained Arasaka solo.

After the Fourth Corporate War ended with the death of her father, Michiko was faced with her own dilemma.[4] She no longer had the help of her father and family company was now hated as one of the instigators of the conflict. This was especially hard with the after President Elizabeth Kress blamed the Night City bombing on Arasaka, despite the fault lying with Militech. The president used this to demonize Arasaka for her own interests. Michiko, a sheltered 17 year-old high schooler, had known very little of her elder family's world-spanning machinations and her father had kept her away from the more unsavory side of the family business. With the Arasaka Corporation now banned from the Americas, Michiko faced deportation to Japan.

Michiko's solution was to lean heavily into her strengths. She used her youth, adorably cute persona, and high IQ to her advantage. She already had thousands of devoted young fans all over the world who were willing to take it as her being an innocent bystander who had nothing to do with the corporation. She started by traveling to Washington, D.C. to meet with President Kress, to one make an apology for her family's participation in the conflict and then to plead her case to remain an American citizen. Michiko's meeting had proved successful and she was able to remain in Night City to finish her high school career before entering Stanford University, where she majored in criminology. When she graduated three years later, she started her own business.[4]

Danger Gal was the name of the company Michiko founded in Night City. On the surface, it was a private investigation firm specializing in cases for celebrities and other important clients. As the perky, unstoppable head, Michiko was a staple of parties and events from New Hollywood to the hot spots of recovering Europe. Her visible naivete and irrepressible charm disguised the fact that she was also a highly competent criminologist. It also obscured the fact that behind the scenes, she was fulfilling one of the directives she agreed to perform as part of her deal with Elizabeth Kress to remain in the United States: to locate and dismantle any Arasaka operations in and around the country.

In Night City there was no better face than Michiko Sanderson, her surname was taken when she married her partner, detective Marc Sanderson. In her thirties she still exuded the same bubbly, enthusiastic charm that won the world over in her late teens. A constant sight at almost any important social gala, Michiko had a string of successfully solved cases that had made Danger Gal the top of its class. Michiko had grown into an elegant, lovely woman who could read a room like a book and yet never revealed anything to her suspects other than her happy, cheerful façade she kept up. Behind still was her loyal bodyguard Kenichi Zaburo, however he was not as visible to the public as he once was in her teens and no longer wore Arasaka branding.

During the 2040s, Michiko led the Hato 鳩 (Dove) Faction of the Arasaka Corporation. This was the liberal wing of the corporation unified those who sought deeper reforms. While Hato held the least power out of the three factions, they still enjoyed the growing support popularity among some politicians and media personalities.[4]

During this time, Michiko Arasaka became an official member of the board in the Arasaka Corporation, although her faction still held the least amount of power of the three.

After the death of her grandfather in 2077, Michiko - like the rest of the Arasaka board - was quick to accept her uncle Yorinobu as the new CEO. In the memorial parade for Saburo during the Aratama Matsuri, she complied with her uncle's wishes.[5]

Michiko attended the board meeting setup by Yorinobu at Arasaka Tower. The meeting was interrupted by her aunt Hanako, who brought V, a witness of Saburo's murder. The mercenary testified to the board of directors of Yorinobu's betrayal. Michiko was reluctant to believe V, until Hanako showed the board the engram of Saburo, who explained the situation and scolded them for their cowardice. Michiko asked Saburo for his orders, who told the board to follow Hanako's orders as if they were his own. Yorinobu's troops interrupted the meeting, killing all board members with the exception of Michiko who managed to hide behind one of the chairs. After V and other Arasaka soldiers handled the attackers, Michiko stayed behind with Hanako while V left to confront Yorinobu.[6]

Mike Pondsmith first mentioned Michiko Arasaka while in a Poland panel where he had a live Cyberpunk 2020 session. Later, when asked about the scenario on Reddit, Mike answered it was known as "Michiko's Night Out."

The name of the scenario is "Michiko's Night Out." It involves the granddaughter of Saburo (Kei's youngest daughter) leaving the Arasaka compound on her 18th birthday in the company of her personal bodyguard, the super solo Kenichi Zaburo (Morgan's Arasaka nemesis). While she's out barhopping in Night City, she runs into (and causes) enormous amounts of chaos, culminating in a wild fling with --get this--Adam Smasher, the cyborg.
I ran this scenario for my own players and extended it over several months. It's a favorite of mine, because the external threats are far less troublesome that the ones the players bring with them to the table. And Michiko is a wonderful NPC to play--she's like Battle Angel Alita crossed with a mad Girl Genius. You will meet a somewhat older Michiko in the Time of the Red, and she might be showing up in 2077.[7]
We're holding off on publishing [the scenario] since Michiko continues to exist in the 2077 timeline. Have to sort all that out first.[7]

Upon release of the Cyberpunk RED Jumpstart kit, it was finally made clear that Michiko had become a canon character in charge of a faction of the Arasaka Corporation and also had her own company, Danger Gal.[8] 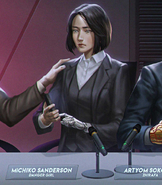 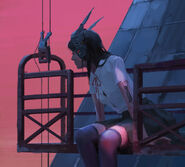