Meredith Stout worked for Militech as a senior operations manager.[1] In 2077, a company leak led to a Militech convoy being hijacked by the Maelstrom gang and, with the corporation suspecting inside knowledge, tasked Meredith with finding the leak. Shortly after she found evidence leading to her prime suspect, Anthony Gilchrist, who was summarily caught and interrogated by her team. However, Meredith did not receive the information she needed or the right amount of evidence. With her job and life on the line, she began to desperately search Watson for any possible leads.

If V called Meredith and met with her in The Pickup:

During this time, Meredith was contacted by a local mercenary named V via holocall and the two decided to meet to discuss the information V had regarding the stolen convoy from Militech. However, Meredith suspected V to be working with Anthony Gilchrist and took the merc by surprise and interrogated them with a quick lie-detector test. Once the test revealed V had nothing to do with her suspect or Militech, Meredith then decided to discuss terms. V explained that they knew who had stolen Militech's convoy and could help lead Meredith to them if she was willing to help. After listening to V, Meredith decided to work with the mercenary by giving them the money they needed for the purchase of the Militech Flathead and in exchange, she would let V take the Flathead. This came with one caveat though: V had to use the money chip she supplied as it had malware installed on it to track the group down, though she conveniently left this detail out when talking to V.
If V notified Royce of Militech's involvement or refused to take the chip:

After an unsuccessful investigation, Anthony Gilchrist took over the investigation from Meredith and disposed of Meredith's team, replacing them with his own. Meredith was executed and thrown into the Watson harbor.

If V followed through with Meredith's plan:

The Militech shard was able to successfully destroy Maelstrom's systems and gathered all the information she needed. Seeing confirmation of her suspicions of Gilchrist, she had him killed and left his body in Watson. After the firefight in the All Food's Plant, Meredith reached the site with her team to greet V and V's fellow mercenary, Jackie Welles. Meredith acknowledged that she and V worked well together and maybe in the future they could possibly work together on other assignments.
Meredith later appeared on N54 News as Militech's Government Relations Executive during a ceremonial partnership signing between the corporation and the NCPD at City Hall.
If v responded to Meredith over text saying "they were starting to like her" in Venus in Furs:

Meredith messaged V stating that everything worked out as she had hoped. Despite Meredith not wanting the public to know about what they did, V replied stating they were more fond of her. Meredith, unable to resist, told V to meet her at the No-Tell Motel. The two later met there for some intimate alone time. 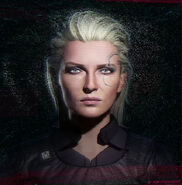 Concept Art
Add a photo to this gallery

Retrieved from "https://cyberpunk.fandom.com/wiki/Meredith_Stout?oldid=91441"
Community content is available under CC-BY-SA unless otherwise noted.