Cyberpunk RED
Cyberpunk 2077
Lucius Rhyne was the mayor of Night City in Cyberpunk 2077. His office is located at the city hall, in The Glen, Heywood District. After Rhyne's unexpected death, the focus of Night City politics turned to who would replace him: Deputy Mayor Weldon Holt or Councilman Jefferson Peralez.

Lucius Rhyne was born on October 12, 2017 in a Trauma Team clinic in Night City. His father worked at Arasaka, and his mother was a NetWatch officer. When Lucius was five years old, his father was killed during the Night City Holocaust. A few years later, Lucius's mother was captured by one of Rache Bartmoss's rogue AIs while on a mission in cyberspace. In spite of the financial hardship of providing care for his mother's body, Lucius enrolled at the Richard Night University and graduated in Cybernetic Law. He embarked on a professional career for 20 years before he became a member of the Night City Council.[1]

In 2045, before he became mayor, Lucius was a rare idealist working to make the world a better place. He was well-known for his inspiring speeches and calls to action in the newly formed Watson Development.[2]

In 2060, Lucius Rhyne was elected to the notoriously corrupt Night City Council as a member of the Devolutionist Party. During the Unification War (2069 - 2070), Councilman Rhyne led the city's defense effort against the New United States of America. Rhyne was the one who convinced Arasaka to come to Night City's aid, which brought the war to an early close in June 2070. Night City secured its independence, Rhyne was elected mayor, and Arasaka was welcomed back to the city and permitted to rebuild Arasaka Tower. Rhyne's time in politics made him a wealthy man, but appeared to have dulled his ideals. By 2076, public opinion on him had split, and he was either respected as the city's savior or reviled as its most crooked politician.[3][4][5]

Later in 2077, Lucius Rhyne was gearing up for re-election and his main opponent was Councilman Jefferson Peralez. On the day of the Konpeki Plaza heist, Rhyne was comfortably leading Peralez in the polls and boasted a job approval rating of 60%. Rhyne scheduled a press conference to speak about Night City's recent 3% drop in crime rate, an accomplishment only made possible by the mayor re-designating Pacifica an "independent district" of the city to exclude its crime statistics from official numbers. Shortly before the start of the press conference, a cyberpsycho named Péter Horváth breached Night City Hall on the heels of NCPD Detective River Ward and moved to kill the mayor with his Mantis Blades. Ward gunned Horváth down before he got close enough to hurt Rhyne. In gratitude, Rhyne presented Ward with the Medal of Merit. When news of the failed assassination attempt broke, Rhyne's lead over Peralez surged from 12% to 19%.[6][7]

That afternoon, Rhyne and Deputy Mayor Weldon Holt met with Arasaka reps at Konpeki Plaza to discuss Arasaka's plans to buy up low-income housing in Watson for corporate re-development. Rhyne was reluctant to approve the land grab because Watson was his main constituency and it would hurt his image. Unbeknownst to the meeting's participants, the merc V remotely controlled a cloaked Militech MT0D12 "Flathead" drone through the room while preparing for the theft of the Relic in Yorinobu Arasaka's suite and eavesdropped briefly. Rhyne and Holt wrapped up the meeting and departed the hotel before the heist took place three and a half hours later.[8]

With Rhyne looking to unwind after a long day, Holt arranged a private booth for the mayor at an invitation-only sex club known as the Red Queen's Race. However, whoever was behind Horváth's attack earlier was not finished trying to end the mayor's life and had a lethal virus inserted into Rhyne's braindance wreath, killing Rhyne after he activated it at the club. Not wanting the circumstances of Rhyne's death to affect his career ambitions, Holt instead had Detective Harold Han cover it up by sneaking Rhyne's body out of the club and back to his residence and to state he died from heart complications. This abrupt nature of Rhyne's passing fueled a number of conspiracy theories which alleged that Holt either had Rhyne assassinated or helped Rhyne fake his death.[7] 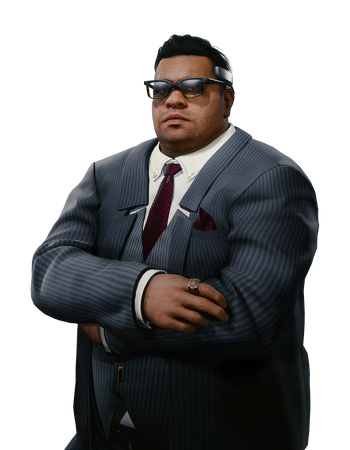 Mayor of Night City, considered by many to be the right man for his time and place, and by others as the city's biggest crook.

During the Unification War, when NUSA forces tried to take the city and annex it into the union, Rhyne led the city's valiant defense. Under his leadership, Militech's tanks were repelled and the Night City became fully independent. Despite continuous accusations that Rhyne is greasing his palms with corporate money, for many he remains a symbol of Night City's freedom.[5] 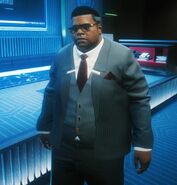