The World of Cyberpunk 2077
Cyberpunk 2077
We are who we pretend to be, I've pretended to be everything - that's why I've found the truth.[1]

Lizzy changes her looks frequently, having a detachable cybernetic jaw and utilizes a full-body replacement in order to become her signature chrome form,[3] including Midnight Lady accessories.[4] As of 2077, she lives in the North Oak sub-district of Westbrook, in Night City.

I always felt like my mission was to cross the ultimate frontier. That frontier is death.[5]

As her concert ended, Lizzy ate a synthetic apple laced with specially-prepared poison that induced cardiac arrest. For a full minute, the LED screens showed a close-up of the flatline on her electrocardiogram while her body was motionless on the floor. For five and a half hours the concert was on hold as a team of ripperdocs swapped out her biological organs for the latest generation of MoorE Technologies implants. Lizzy was eventually revived after the implants were put in place and once she got up off the floor she began to sing "Re-start, Re-heart, Repeat" a single that sat at the top of the world charts until 2072.[6][5]

Lizzy's anarcho-terrorist "performances" were inspired by her frequent stylistic transformations. Before them, she was known for giving away her clothing - to friends and people who needed it - but afterwards Lizzy wanted to give out implants, though it turned out that top-tier cyberware was linked to its user, and couldn't be simply given away.

Lizzy is known for her views against homogenization, and at some point she mounted an armed assault on a BioDyne Systems factory, during which she and a group of mercenaries took full control of the building and stole approximately 1,200 different implants. The stolen items were shortly later given away at an improvised concert. The heist and concert were broadcasted live, as she knew no corporate soldier nor police officer would dare to kill or harm her on live T.V. In the years following, the media argued that the heist had been arranged beforehand with BioDyne and that Lizzy paid for the implants and the renovation of the factory. The theory is seemingly supported by the fact that BioDyne never pressed charges against the artist. Lizzy still denies these speculations, claiming that the corporation co-opted her heist as free advertising.[5]

Her latest artistic obsession by 2077 featured the medium of braindance. Lizzy wondered about the boundary between our documentation of reality versus of our active shaping of it. Due to this, fans speculated she was planning to scroll her own BD.[1] 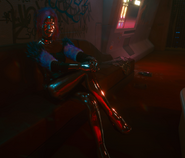 Lizzy inside the No-Tell Motel

Lizzy Wizzy and the Metadwarves poster

Lizzy Wizzy and the Metadwarves poster

Lizzy's early design, with her chrome and jaw removed

Concept art for the previous image