The Laguna Bend Dam is located in the reservoir of Laguna Bend, in the southeastern section of the Badlands.

Around mid 2062, the terrains around the township of Laguna Bend were bought by NC Dam Ltd. - a corporation who planed to turn the region into a reservoir. Some of the townsfolk left while the ones that ignored the municipal directives and stayed became victims of a corporate smear campaign which identified them as "agents of public unrest" - people who were preventing necessary construction in order to secure access to clean water for all of Night City. As a result, public opinion quickly turned against the residents of Laguna Bend and few paid attention to the change in police tactics and open violence against them.[1] In the end, all residents were forced to leave the town, and the few who still wanted to stay were forced out by the police. By the time the newly constructed dam was operational, the whole settlement was already submerged.

The multimillion-eurodollar structure turned Laguna Bend into a reservoir of two million hectoliters, and any memory of the struggle of its former residents was quickly forgotten.[2] Unfortunately, the project didn't work out as planned because the water of the lake turned toxic for unknown reasons.[3]

By 2077, the water was not as noxious as it was fifteen years prior, and with a good diving equipment it was possible to safely dive in its depths.[3]

The structure currently prevents Laguna Bend from emptying its water on the drained basin to the north. Unlike the Badlands Dam, personnel keeps this one in pristine condition. A road goes above the structure itself, all the way to a collapsed tunnel to the east.

The basin area and dam in the background 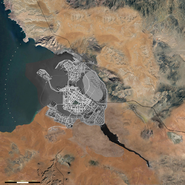