Kerry Eurodyne is vocals and lead/rhythm guitar for Samurai. A frequent central character appearing in Cyberpunk 2013, Cyberpunk 2020, and Cyberpunk 2077.

Kerry became famous by being vocals and lead/rhythm guitar for Samurai. Ever since he and superstar Johnny Silverhand parted ways, disbanding the hit group, Kerry has been a successful solo artist. He's withstood the test of time. His albums have gone platinum. His broken guitars have been auctioned for thousands of Eurodollars. And his singing voice is recognized worldwide.

Kerry Eurodyne a man of Filipino descent joined the band Samurai in 2006, with his friend and lead singer Johnny Silverhand. Kerry was known for his singing abilities and being an expert lead guitarist. One night at the Rainbow Cadenza, a wild eyed, dorph looking person approached Johnny and Kerry wanting to book their act. Naturally, Samurai thought this guy was so high on dorphs that he was talking nonsense, until he gave Johnny his card. The man was none other than Jack Masters, the head of Universal Music. Within three weeks, Samurai were signed to Universal, had a record in production and were preparing to tour every major city in the world. In 2008, after only a few years, Kerry and Johnny split up and the rest of the band soon followed.

In 2013, Kerry was at the start of his solo career, eager to shout his own message. He did his time touring with Silverhand, and he had a deep concern for the destructive culture that dominated the world. The road trips were sobering: Fans murdered each other just to get tickets, everyone carried a gun, and the scenery from the tour bus was either a polluted corporate structure, or a colorless mother Earth plundered of her resources. Filled with determination, Kerry started writing songs again.

First there was his off-center album Modern Trenches, chronicling the tragedies and heroes of the Second Conflict. Then came Critical Mass, the tribute to the victims of the annihilation of Colorado Springs in 2008, followed by Made in America, a dedication album to the families who suffered in the Chicago bioplague of 2012. In each of them, Kerry chanted behind synthesized choruses: Time for Change.

But it was the Age of Survival; most people were only interested in cheap drugs, fast rides, and slow death to enemies. Firefights were an everyday occurrence. Though people loved Kerry Eurodyne's sound, they didn't seem to grasp the meaning of his lyrics. Like an angry father scolding someone else's child, Kerry sang the world's injustices to tone-deaf ears.

Three types of people emerged from this age: the dead, the paranoid, and the retired. The dead were the easiest to deal with-you sold them for parts. The paranoid were mainly the ones in power. They had won the game of backstabbing, murdering, cheating, and soul-selling. The retired were the people that had quit playing the game: yesterday's edgerunners, now too old, too wounded, or too tired to keep up with the latest ways of burning their opponents. Kerry related to them all too well.

These people were looking for more value out of life and were taking more responsibility with their actions. It even became a trend. Noted one reporter: "It felt like the Second Coming of Manners." Kerry Eurodyne smiled - maybe change had come.

But so had the ISA. The year was 2023, and Kerry was starting to work on his latest album, Facing the Nightmare. His daughter, Derry Eurodyne, had just celebrated her twelfth birthday when he began to realize his most important audience-the kids. Ultimately, they controlled the future. But how would he get their attention? Then a Neo-Progressive Party agent approached him with an offer of unlimited sponsorship. To spread the gospel across the nation, Kerry needed money, and the Neo-Progs were ready to donate to his cause. Plus the Neo-Prog Parties had purchased the four largest radio networks in the U.S., promising him valuable air time.

So he was there when the ISA was declared in 2024. It sounded like a great deal. The ISA seemed to be doing great work to rebuild the nation, sure enough, but exclusive sponsorship was a big commitment. Too big for Kerry's taste. Instead, he met them halfway. He wrote several pro-government jingles including one for the Gun Bounty. He performed at high schools. He hosted anti-violence rallies. But the youth were more interested in alternative "garage band" talent and actually accused him of selling out to the Machine. Disheartened, Kerry began to suspect that they were right.

Then the Carbon Plague arrived, and everything did change.

The year was 2026, and the ISA had declared war against the CNM virus. Kerry was urged to support them, and received pre-written melodies produced digitally from samples of his voice. "Support Whindam," the lyrics said, "and your children will be safe." The only thing needed was his personal approval before they were sent to be mass-produced. But the ISA seemed to have turned on him; it now had a ruthlessness that chilled. Kerry politely backed out of his deal before his sponsor's power had a chance to strangle him.

He reunited with the man now called Mister John Silverhand, and found a place in the CyberRevolution. Given a new purpose in the wake of the most destructive virus since the Black Death, Kerry Eurodyne took to the stage with a new album and a fresh message: Domino Destiny. A new trend was forming, and once again Kerry Eurodyne wanted to be its voice. And the kids finally listened. Suddenly, it was the children that filled his concerts. They sang along with his songs on the radio. His album titles and choruses became secret code words for clubs and yogangs.

Then, like a dark chord in a haunting song, the Plague found his daughter Derry. He was on tour and out of town when it happened, and by the time he got home, she was gone. All that was left was a note scribbled by some uninformed teen yoganger: "You adults suck. Kidz rule. The CNM makes us strong. Yer dotter is getting strong. She is one of us now."

Frantic, he scoured the streets looking for her and sent word through Alt's network for any news. Days later, in an abandoned hideout, they found her, dead from the Change. She had been thrown into a bathtub and covered with fax paper a shallow, porcelain grave for the GlitterKid daughter of a megastar. Enraged, Kerry demanded answers but found none. If a yogang or group of CyberEvolved had taken her, no one admitted to it. Though little could have been done to help her, Kerry felt certain that she would have survived if he'd been with her. Guilt and anger battled for control of his soul.

Kerry Eurodyne is now at the crux of a severe emotional crisis. Once proud of the CyberRevolution, he now feels some- how betrayed by fate, and unsure about whether he can continue to be part of the movement. As one of the few Revolutionaries who's worked both sides of the street, his connections have made him very valuable. But with his cur- rent instability, they may make him extremely dangerous.

In 2077, Kerry lives in a villa in North Oak and is a solo artist still performing. Kerry can be see in flashback sequences during a Samurai concert in Night City. 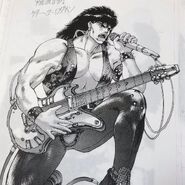 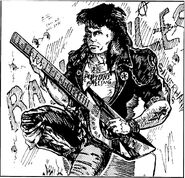 Johnny Silverhand and Kerry in the Studio.

Kerry Eurodyne from the Rockerboy Sourcebook.

Kerry Poster 2077
Add a photo to this gallery

Retrieved from "https://cyberpunk.fandom.com/wiki/Kerry_Eurodyne?oldid=35250"
Community content is available under CC-BY-SA unless otherwise noted.