Judy Álvarez is a skilled braindance technician and a member of the Mox. She has her own apartment in northeastern Kabuki, Watson District.

Judy is a possible romance option for V in Cyberpunk 2077.

Judy was born in Laguna Bend, a small town in the rural outskirts of Night City. Her father was never around, and her mother died when she was just a child. She still has a photo of her, but can barely remember her mother anymore. Judy was raised instead by her grandparents. Her grandfather was a techie and taught her all that she knows. She also loved to hear the stories he told. Ainara, her grandmother, was temperamental, something Judy herself seemingly inherited.

While growing up in her hometown, Judy used to hang out with the other kids, sometimes playing street hockey on rollerblades or "MaxTac and psychos", though they often mocked her for not having her parents around and being poor. She also liked to eat the burgers of Flo's Diner, the only eatery in her town.

Around 2057, Judy hid Jenni Chapman's doll as she thought that only losers played with them. What Judy really wanted, though, was for Jenni to notice her, and she proposed to help her find the missing doll. In the end neither of those things occurred.

Despite not being religious, Judy sometimes visited her town's church - a building she always thought looked old and out of place - simply because it was just there. Once, she snuck inside of it when no one was around and stood at the altar, wondering what went through the priest's mind when he looked at the people, asking herself how he could read their minds and know everything about them. She then screamed at the top of her lungs to check the acoustics of the building, but when the echo returned, it scared her and she ran away. Judy thought it was all the guilt she felt for having a crush on Jenni, and after screaming it out, it had bounced back to her.[5]

When the area of Laguna Bend was bought out by NC Dam Ltd. some time around 2062, the residents were forced to vacate as the corporation had plans to transform the region into a reservoir. Although there were protests in the months that followed, the residents were eventually outed from their homes. Judy and her grandparents moved into a rental apartment in Night City, but her grandparents hated the metropolis and left a couple of years later. They moved further north to Oregon while Judy stayed and made the apartment her own.[5]

When Judy was sixteen years old, she was convicted and detained for stealing a fire truck. In reality, Judy had not stolen it but instead found it abandoned in a scrapyard. She decided to fix it up - which took her half a year - and then the police busted her on her first ride. They did not believe Judy and proceeded to detain her. Many years later, Judy tried to get some kind of compensation for what she thought was "an unlawful juvenile arrest." She contacted a lawyer in hopes she could help her win a compensation from the City Council, but she dismissed Judy stating it was something very difficult to achieve and not worth the trouble. Thinking that the woman didn't believe her either, Judy dropped the case.[1]

Judy worked as a braindance technician at Clouds for a time. There she met most of the dolls, including Evelyn Parker, Tom Caldera,[6] and Maiko Maeda, the latter whom she eventually begun a relationship.[7] Judy also helped Maiko jump up the ranks by tweaking the stats on her doll-chip, not only to help her but also hoping things would change for the better for both of them.[8]

At some point, Judy left Clouds and found work at Lizzie's Bar as a braindance technician and editor, joining the Mox in the process.[9] She thought they could improve the lives of the people in Night City for the better.[7] Judy installed her equipment on the bar's basement on behalf of Susie "Q", the Mox leader. While working at Lizzie's, Judy maintained contact with the dolls at Clouds, especially with Evelyn - whom she had become her best friend - and Maiko.[1]

Since Maiko's promotion, Judy's relationship with her had started to become more difficult, but still she visited her girlfriend at her office in Clouds whenever she could. Judy was jealous of how much time Maiko spent around other girls at Clouds, and one day she finally mentioned it to Maiko, but got over it hoping to spend some interesting time with Maiko later. First though, Judy had to attend the anniversary of Lizzie Borden's death and the Moxes creation.[8]

One day, when Judy was trying to get into Maiko's office the security didn't let her. After going home, Judy messaged her girlfriend and told her about it. Maiko tried to excuse herself saying it was due to "procedures", but Judy knew it was her call since the security had contacted her right before that. Maiko asked Judy to cool down, as this could mean trouble for her, stating she had to keep up some semblance of professionalism, and didn't want to lose her position after how much she had endured to be there. This caused an argument between the two in which Judy said that things were as bad as before, but not for Maiko as she was doing just fine. Maiko responded that she was doing it for them both, that she was thinking about their future together, and didn't understand why that made Judy so angry. Judy realized that their perspectives on the world had changed, and she had been left behind. Maiko was just looking for more power and Judy was ashamed she hadn't noticed sooner. Judy simply hoped that when Night City chewed up and spit Maiko out, she would still have something of her old self left. Some time after the argument, Maiko asked Judy to give her time to think about everything, and to give herself time to cool down, but for Judy it was over.[8]

Some time later, Judy asked Maiko to go to her apartment and take back her clothes, something Maiko didn't care about and asked Judy to get rid of them. Despite this, Maiko wanted to go to Judy's apartment to talk things out, as she felt everything had escalated too quickly and maybe it was just a misunderstanding and that things didn't have to end that way, at least not so suddenly. Judy didn't buy it. There was nothing else to talk about, stating Maiko was doing what she always did - buttering her with promises she didn't actually wanted to keep. Judy said she would simply leave her clothes on front of the apartment's door, and would not open it if Maiko tried to knock. An angered Maiko answered Judy could toss her clothes out of the window if she wanted, as she didn't care and would not visit her. Judy sarcastically replied it was nice Maiko could afford to toss her clothes, and if any of hers were on Maiko's place she could leave them on the street for people who needed them. As for her ex-girlfriends clothes, since they were expensive, Judy stated she would rather burn them.[8]

After a long time since her last talk, Evelyn contacted Judy, asking if she was still cooped on Susie "Q"'s basement and if she was still dating Maiko. Judy told her one of those things was still true. Parker had messaged her because she needed help with a small but important favor. She needed to have a virtu scrolled, and knew Judy was the best. In exchange, she promised her a life free of work where Judy could just focus on her art. Evelyn asked to at least meet, and wondered where she could find her. Judy simply answered "in Susie Q's basement".[1]

Some time after Evelyn had explained what she needed from Judy, the two had some drinks at Lizzie's Bar while waiting for Evelyn's contact to appear. Once they did, Judy finished her drink and went back to the basement. Later Evelyn appeared with her contact and introduced V to her friend. Judy helped V to tune up for a braindance and showed them how to edit it. Afterwards they proceeded to scroll Evelyn's recording to find her objective. Once done, Judy gave V the portable device they had used for the scrolling, as it already had V's profile and in case someone could trace its use to her. She also commented that whatever it was Evelyn and V were planning to do it would kill them both, expressing she didn't want to have any trouble for helping them. Evelyn reassured Judy that there would be none.[10]

One of braindance's most gifted editors and a skilled techie. If she wanted to, she could get hired at any corpo entertainment studio and make bank, but Judy values her independence too much to sell out - she rejects every offer that comes her way. Her anarchist spirit drew her to the Mox in the hope that they could improve the lives of people in Night City. Her biggest flaw is that she can't keep her mouth shut in the face of injustice - something that always gets her in trouble. For some, though, it's her greatest virtue.[7]

Judy is a potential romance option for V in Cyberpunk 2077. V needs to have a feminine body type and a female voice.

Across her multiple quests, both characters can become closer. V just needs to be understanding, and help her when she needs it, but it is possible to refuse some of her propositions without any consequence. As an example, it's not necessary to kill Woodman during Ex-Factor.

Eventually, V will be part of a plan to make Clouds independent from the Tyger Claws. During Pisces, when Maiko Maeda reveals her plans to the Tyger Claw bosses, V has different options to deal with the outcome. To be able to romance Judy V must follow their initial plan, or agree with Maiko's scheme without later accepting her money. If V follows Judy's plan, at the end of the quest she will kiss V on the check, but this is not mandatory for a viable romance.

If the quest ended with a good relation between the two, some days later Judy will call V to meet at Laguna Bend, starting the quest Pyramid Song. At the lake both will explore the underwater ruins of Judy's hometown. Once back on the surface, if V agrees to spend the night at the house, Judy will eventually lock herself up in the bathroom. After V enters and sits at her side, Judy will reveal how things ended up with Clouds and the dolls. If done right, Judy will say that she only wanted that day to be special for both of them. V can accept her advances, comfort her, or lean away. If choosing the "comfort" option, another opportunity will appear with the following dialogue. Afterwards a cinematic will play with Judy and V making love. Next morning, V can find Judy on the pier outside the house. During the dialogue Judy will ask what that night meant to V. The player can decide it meant "The beginning of something amazing" or just "A pleasant distraction". The second option will make Judy angry and she will leave right away. She will also remove V from her contacts some time later, and leave Night City. The first option will make both characters enter into a romantic relationship. This option will also make Judy stay in Night City until V is done with her business.

Judy engaged in a braindance session

Judy on the rooftop of her apartment 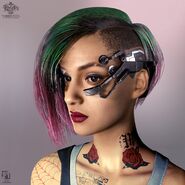 Image from the The World of Cyberpunk 2077 (extended version)

Some of Judy's tattoos