Johnny Silverhand is a central character throughout the Cyberpunk series, as well as an influential Rockerboy and the lead singer of the band Samurai before the breakup in 2008.[2][3]

Johnny Silverhand, originally born as Robert John Linder, is a man everyone in America knows about. An ex-US military veteran who made the rockerboy movement to what it is today. He was the lead singer of the band Samurai and one of the most prominent figures that fought against the corporations. More so then any corp, Johnny hates Arasaka and wishes to burn them to the ground for what they did to his girlfriend, which may or may not have been his fault. He's charismatic and quite the charmer. However Johnny is also known to be irrational, impulsive, and a manipulator.

Johnny has a temper and seems to always be on edge, mostly due to his history in the Central American Conflict. His dedication and ambitions are what keep him going, but at the end of the day he doesn't care for anything else but seeing Arasaka burn and his girlfriend freed.[4]

In 2077, Johnny is still as ambitious as ever. He has his own agenda he wants to accomplish and plans to use V to get to it, it's up to them whether Johnny is to be trusted or not.

Robert John Linder was born November 16th, 1988, and later enlisted into the US military young, and it didn't take long to see some action. The Central American Conflict started in 2000s. It was a bloodbath, ran by a corrupt and manipulative government. But when their secrets were exposed, many of the American soldiers dropped their red, white, and blue weapons. Instead, they fought back by deserting the military. The government used its power to create powerful propaganda to make the public hate deserters.

But Johnny wouldn’t fight a corrupt war. So he went back home to Night City and began his life anew. The military had changed his life forever, and he even changed his name to Johnny Silverhand. His last name would represent the cybernetic arm that replaced the arm he lost during war. His every movement would remind him of his mission: rebellion.[2][3]

His rebellion came in the form of a band called Samurai. Johnny started this band with Kerry Eurodyne, originally only playing in backstreet clubs. This was until a producer name Jack Masters discovered them and signed them up. Samurai was a band made up of these members: Johnny Silverhand, Kerry Eurodyne, Denny, Nancy/Bes Isis, and Henry. His music was revolutionary, and the world loved him. He rose to the top of the carts in record time with his band. But Samurai couldn’t last forever.[3]

Their keyboard player Nancy was in an abusive relationship at the time. When she couldn’t take it anymore, she pushed her abusive boyfriend out of a window and was taken to prison. And without her, Samurai split up in 2008.

Johnny Silverhand was still one of the most popular musicians at the time. He planned to use his star power to begin a solo career and continue to push his anti-corporation and anti-government messages. DBS Music wanted to sign him so desperately that they threatened him and even blackmailed him. threatening to reveal his true identity, that he was a deserter.

Instead, Johnny Silverhand signed with Universal Music, and released an entire album calls SINS of Your Brothers admitting that he was a deserter, and revealing all the terrible things the government ordered. The album was wildly successful, and changed public perception of what it meant to be a deserter. And Johnny Silverhand was not even at the height of his career yet.[3]

In 2013, everything changed for Johnny. As he was on a walk with his girlfriend, Alt Cunningham, when she was suddenly kidnapped by thugs working for the mega-corporation Arasaka. They wanted to use Alt Cunningham for her incredible talent as a programmer. They wanted her to develop a software called the Soulkiller that would be able to download any netrunner’s mind. It was a dangerous software, that would have killed anyone whose brain they wanted to download.

Johnny made a plan that require precise timing. He gathered a strike team to infiltrate the Arasaka offices so that he could save Alt. On top of that, he called in a favor from all the members of his old band. Samurai gathered together and performed an entirely free show. The show was right in front of the Arasaka Tower in Night City.[3]

The strike team made it there just moments too late. Cunningham was dead. However, while her body was left as a husk, her mind became trapped inside of the Arasaka mainframe. And Johnny planned to get it back.

Johnny, alongside Rogue and Morgan Blackhand, led an assault the Arasaka HQ in Night City, with the intention of ending the Fourth Corporate War.[5][6]

He went to find Cunningham, but there were more than a few obstacles in the way. The biggest obstacle was a Borg, Adam Smasher, a once man who was now more machine than flesh.[5]

Legend has it, Adam Smasher gunned down Silverhand with a rifle. His body was never found though, because Militech, a company fighting against Arasaka, launched their attack at the same time. They dropped a bomb on the Arasaka building and there was nothing was left to find.[6]

Ever since he disappeared, people have mourned Johnny Silverhand. There is graffiti all throughout Night City that simply says, “Where’s Johnny?” Even decades later, people hold out hope that Johnny Silverhand is somewhere out there, ready to raise some hell and lead the revolution.

During the E3 2018 trailer, several pieces of graffiti can be seen asking "Wheres Johnny?", alluding to the false reports of his death. During the E3 gameplay reveal, V can be heard listening to Johnny's song, Chippin' In, as well as wearing a Samurai jacket.

At the Microsoft E3 2019 conference, Keanu Reeves was revealed to be playing Silverhand. He shows up at the end of the 2019 Cinematic trailer, helping V after they were left for dead in a dump site. In interviews it was revealed he had been approached a year prior to the announcement.

Silverhand acts as V's guide to the city and will be with him or her for most of the game. Throughout the game, the player will be haunted by the "digital ghost" of Silverhand, suggesting that he is physically dead. The full gameplay scope of Silverhand's involvement with the character is not fully known, but he will make comments on the player's actions through voiceover, and will occasionally appear in game as a hologram. Figuring out the mystery of Johnny Silverhand's digital ghost is a large part of the main plot line.[7]

Johnny and Kerry in the studio. 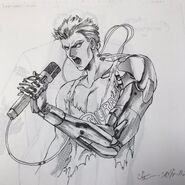 Firestorm
Add a photo to this gallery

Retrieved from "https://cyberpunk.fandom.com/wiki/Johnny_Silverhand?oldid=35735"
Community content is available under CC-BY-SA unless otherwise noted.