Cyberpunk 2077
Head's never, ever been more clearer in my whole fuckin' life! ... My whole life I've spent in this shit around us! And I ain't going back!

Jackie Welles was a merc from Heywood who teamed up with V to become legends of Night City. He is one of V's early points of contact as well as the player's partner during several missions. He valued friendship, loyalty, and family above all else. Eventually he would plan to provide for his own family and live in luxury, but he got impatient because this was still just an elusive dream.[2]

Jackie Welles was born in 2047. When he was a child, his father would get drunk and beat him and his mother mercilessly with his belt, but when Jackie became strong enough, he returned the favor and hospitalized him, and threated to kill the old man if he returned home. His father left and was never seen again. Jackie kept his father's belt and planned to use it on him if he ever returned.

Jackie grew up in the same streets with Misty Olszewski and the two saw each other a lot, though they never got together. At the age of fifteen Jackie first got on a bike, and since then he has been tinkering with any that he could get his hands on.

Early on, Jackie joined the Valentinos along with Gustavo Orta, quickly becoming both friends. However, a near-fatal incident from getting shot in a firefight during a gang war with the Maelstrom convinced Jackie to leave the gang for the sake of his mother when he was 19, but he stayed on good terms with the gang and Padre.[3]

In 2076, Jackie began dating Misty. Jackie's mother disapproved of Misty and preferred his ex-girlfriend, Camilla, but Jackie continued to see Misty and even attempted to understand her spiritualism by making a mandala in his garage.[3]

Much later that same year, depending on the lifepath chosen for V by the player, Jackie will have a different introduction, with each having a different intro questline that leads into the main plot:

If V has the Nomad lifepath:

Jackie hires V to smuggle a crate from the SoCal Badlands into Night City. After crossing the border, they are pursued by an Arasaka convoy, but manage to slip away through the Biotechnica Flats. With the car broken down and no where to go, Jackie offers V to stay with him until they have enough money.

If V has the Streetkid lifepath:

Jackie encounters V while attempting to steal a luxury car. They are arrested, however, by an old NCPD acquaintance of Jackie, inspector Henry Stints. The car's owner appears and orders Stints to kill them. The inspector then orders his men to knock them out, and decides to toss them on a back alley; bruised but alive. Afterwards Jackie introduces himself to V, stating he has seen them a few times in El Coyote Cojo. Then Jackie invites V to a breakfast, eventually offering them to stay in his apartment until they have enough money.

If V has the Corporate lifepath:

Jackie is a long time friend and confidant of V, helping them out whenever possible. During a meeting in Lizzie's Bar, an Arasaka entourage strips V of their corporate status, but before proceeding to execute them, Jackie intervenes. Afterwards the former Valentino ensures V this is a new start over for them, offering V to stay in his apartment until they have enough money.

Six months later by late April 2077, Jackie and V were recruited by Dexter DeShawn to steal the Relic from Yorinobu Arasaka for Evelyn Parker. During The Heist at Konpeki Plaza, Jackie was fatally wounded. Although he and V managed to escape the hotel, Jackie succumbed to his wounds in the Delamain Cab before it arrived at the No-Tell Motel for the meetup with Dexter. V decided where Delamain should transport his remains.

If Jackie's body was send to his family or if Delamain was told to wait for V:

Mama Welles called V and mentioned his family and friends were conducting a traditional ofrenda to mourn his loss. Guests include Viktor Vektor, Padre, several Valentinos, and Misty if V insists that she should attend in spite of Jackie's mother's opinion. V can choose to speak at the ofrenda. When the ceremony concludes, Jackie's mother presents V with the key to Jackie's beloved ARCH motorcycle as a parting gift. After The Heist you can find Jackie interred in the Columbarium in the south part of North Oak. The epitaph on his tomb reads: "Good night, sweet prince."[3]

If Jackie's body was send to Viktor:

Although the Jackie's body was delivered to Viktor Vektor, it was intercepted by Arasaka. Takemura revealed later to V that Arasaka used Soulkiller to find out more about the heist. Few engrams were meant to learn more about the Relic's true nature. However when Jackie's engram appeared to V in Mikoshi, they admitted that it's nothing but data pretending to be human.

If V help's Alt Cunningham get control of Arasaka Tower:

After V brought Alt into the Arasaka Tower computers, she destroyed Mikoshi and had Jackie's engram fuse with the image of her to become an even more powerful AI.[4] 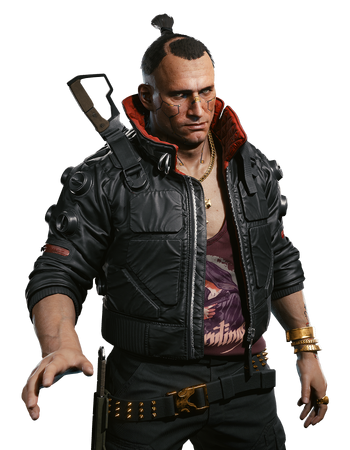 A proud son of Heywood and an even prouder son of Mama Welles. Jackie's stubborn - when he wants something, he won't stop (or shut up about it) until he gets his hands on it. Jackie always wanted a lot out of life - maybe too much.

As a teenager, he joined the Valentinos gang, but realizing how much he was capable of - he quit. For years he hustled through the unforgiving world of merckwork, because you need more than a go-getter attitude to sit at the big boys' table - you need street cred. Jackie's life goal has always been to become a legend at the Afterlife and make a heap of eddies along the way.[4]

Jackie played a major role in the Cyberpunk 2077 48-minute gameplay reveal, serving as V's partner on the mission Breaking Through, wherein V is tasked with rescuing Sandra Dorsett from the Scavengers before they harvest her body. In the gameplay reveal Jackie had a car which V could drive.

In the 2019 E3 cinematic trailer Jackie accompanies V on a mission from Dex to steal a special cybernetic augmentation chip. Although the chip is successfully retrieved, V essentially botches the mission by drawing too much attention to the theft and Jackie is presumably killed in the ensuing firefight, leaving V heartbroken and wracked with guilt.

In a recent #REDstreams livestream, senior quest designer Patrick Mills noted that in a very early version of the game's story, Jackie was originally supposed to be an annoyance towards the player, and was the original cause for The Heist featured in the prologue failing.[5]

Jackie on his bike.

A young Jackie with his parents Raúl and Guadalupe