Italy is one of the strongest countries in the EEC, one of the biggest economic powers in the world. Biotechnica one of the largest Megacorporations is headquartered in Rome.

Italy is a country that had been hampered in the 2020s,due to the southern region. The South was home to popular criminal organizations: the Neapolitan Camorra and the Sicilian Mafia. In an attempt to achieve local control of the federal government they had been constituted as political parties. Even though most of their businesses had been legalized, access to political power enabled them to perform a higher level of a corrupt deal. The fact that Mafia-controlled areas seemed better off, than other parts of the south had strengthened and expanded their hold.

At some point Biotechnica was founded in Rome. In 1991, amidst an energy crisis, Biotechnica developed a substitute for fossil fuel usage that would end up being called CHOOH2, changing the world forever. Under the leadership of Nicolo Loggagia, he taken what began as a small company based out of an industrial park in Rome and made it into one of the most important Corporations in the world. Loggagia's goal was to restore the biosphere of the planet, starting with endangered flora and fauna and working up to recreating some of the most interesting extinct animals throughout history.

In 1992, the European Economic Community was established, Italy was among the first countries to join with France, Germany, United Kingdom, and Japan.

In 1999, the Wasting Plague tore through Europe and the United States. The pandemic was stopped in 2000 when Japan created a vaccine.

By 2077, the northern part of Italy had seceded and become a separate country: Padania. The Padanian government was in the midst of a campaign to prevent the illegal excavation and looting of the sunken city of Venice, which had been submerged in the Adriatic Sea for decades and still held many priceless works of art. Strong demand for the art from collectors fed a robust black market trade that generated profits equivalent to one-third of Padania's GDP, and the government was unable to recover most of the stolen art because the owners usually lived in orbitals.[1]

The Northern State of Italy is the richest and most industrialized part of it, gunning for their rightful place in "Euroheaven". They embrace many of "the German ideals" of what industry and society should look like. The Corporate Coalition is the real political power and authority of the country holding sway over The National Congress and The Northern State, it is lead by Biotechnica and Montedison the foremost Italian corporations. Their rule is often characterized by keeping the big actors within Italy "satiated", they're the reason The Mafia and their lazy Neapolitan cousins are still rich. Milan is one of the richest, most expensive, and most secure cities in the world to live in but due to the insurrectionist threat down South and the increased police presence, many residents feel as if the pontific intellectual culture the cities known for is being suffocated.

Their neighbor's in, The Central State of Italy acts more as an extension of The Northern State, but a lot less pontifical and more moderate in their perspective of the south, probably due to their long history of contact with them. The Central State of Italy is also where Rome, a little world in and of itself, and the capital of the Repubblica is located. The government is typically a puppet of The Norths Corporate Coalition, but a strong display of public agitation by the Romans can change almost any political decision that is made.

The Southern States of South Mia and The Insular Region have it the worst, it has the highest unemployment rate within the country let alone the EEC. And as expected organized crime here is a well-developed enterprise with many crime syndicates acting as the de-facto leaders of their cities. Despite the government's routine crackdowns, the insurrection has continued its ascent, as the flames of resentment and betrayal grow stronger and more fervent amongst the people. The Masses, The Camorra, and The Mafia feel as if it's high time to teach the State and National Governments a lesson about selling itself and it's people out to the corporations. Culminating in the coalescence of the popular resistance movements and criminal enterprises now known as The Nuovu Mutia which is secretly sponsored by the Mafia and the Camorra. Just as long as their targets are corporations and the government. What can I say the enemy of my enemy is my friend. As a result, there are more deaths during a bad weekend in Naples than in the London combat zone and the violence is spreading throughout the rest of Italy. A corporation headquartered within this area would do well to move house... expeditiously!

Italy is located in southern Europe and comprises the long, boot-shaped Italian Peninsula, the southern side of Alps, the large plain of the Po Valley and some islands including Sicily and Sardinia. Corsica, although belonging to the Italian geographical region, has been a part of France since 1769.

The capital of Lombardy, now controller of the North state. Although overshadowed by Rome the new king's corporate movers and shakers are here. It is the economic center the administrator of banks, trade, and industry for the whole of the country. Unlike most Italian cities it is a secure place.

Terrorists have learned the risks of preparing a strike here. This blanket of security hampers most corporate-deniable work as well. Netwatch and Interpol have a high presence here. The visitor will bore herself to death if she has not come here to wheel and deal in the corridors of power

South state capital, it is the most dangerous city in Italy, and possibly in continental Europe. Robberies and assaults are commonplace, and caution is recommended. Don't forget that the main income of the Nuovu Mafia is kidnapping. The Camorru government is trying to secure the streets but has only managed to turn them into a battlefield.

Since 2019, there has been a curfew from 22:OO to 5:00, but nobody respects it After losing the fishing income, sea trade is the main industry of the city. You can get a ship willing to go anywhere and to do almost anything if you have enough money. Europa Sur has a strong presence in the docks, but their relationship with the Camorra is strained, and violence may flare.

The summit of the Italian Mafia, the city is quiet no illegal actions are allowed unless government-sanctioned, and then they are not illegal. Foreigners will be distrusted, not spoken to, and probably harassed by young toughs.

All the monumental Italian cities are kept just-so by huge subsidies form the ECC and the work of Wortrac Consortium, controlling almost all tourism in continental Italy. By 2077, Venice had completely submerged in the Adriatic Sea. There was a thriving collector's market for artifacts extracted from the underwater ruins.[2]

Capital of the Central State and of all Italy. A professional work now in decadence, The Eternal Civ is everything a city can be. All roads go to Rome but Rome is not what it was. Nevertheless, tourism is one of its main sources of income and all visitors will be awed by monuments of the past, history weighs heavily here.

However, Romans seem immune to it If Italians are extroverted and open people Romans are too but squared. You will meet hospitable and friendly persons wherever you go. And while it is easy to meet new people it is still hard to form great long-lasting friendships. It is usual to be approached by a stranger that stops and begins to tell you about his or her life, speaking so fast that it is doubtful this person even speaks Italian.

In the rest of Italy, general respect for the rules of the road is common but in Rome, it is ignored if not completely circumvented! It is normal to see cars taking a roundabout both ways at the same time. Taking a taxi is not recommended for the faint of heart, but it is one of the only ways besides walking to get to where you want to go. Rome is nevertheless weathering well the threat to its supremacy presented by Milan, and it is still the most important city in Italy. Combining the rigid and laborious people of the North and the relaxed attitude of the South, it's a very fun place to be.

In the center of the city are the Vatican State the focal point for Catholicism and the site of the Pope's temporal power. Catholics from all around the world congregate here to see the heir of St Peter. Besides the greatest concentration of religious art in the world, there are many other treasures, as well. But don't be deceived by the apparent lack of security. Besides the fellows With the halberds, the Swiss Guard is one of the best-prepared military forces in the world. 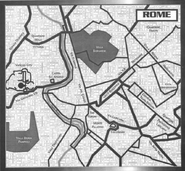