Hong Kong (香港), now known as Ghost World, was a special administrative region on the eastern side of the Pearl River estuary in southern China. With over 9.12 million people of various nationalities in a 1,104-square-kilometre (426 sq mi) territory, Hong Kong was one of the most densely populated places in the world.[1] By 2025, the region was completely destroyed physically by a plague, but regained life in the form of Alt Cunningham's digital consciousness forming an artificial intelligence society within the remnants of the NET in the region.[2]

In 2020, Hong Kong had become a shell of what it once was. Hong Kong still functioned as any other city, corporations took over the city after the conflicts took place in the late 1990s with the MLC. Much of Hong Kong was in shambles, the walled off city within the city still works to their own benefit. Triads rule over and hold influence over the west side of the peninsula. Corporations that stood and fought against the invaders such as; WNS, Arasaka, EBM, and WorldSat were given president over those that abandoned the city. Each Megacorps owned a portion of territory in the newly rebuilt city. While other corporations were forced to reside in other less stable foundations.[3]

In 2045, as victim of the Fourth Corporate War, Hong Kong was destroyed by a plague that hit the city. The Ghost World became under the control of Alt Cunningham's digital consciousness that turned the remains into society made up of AI's that resided from the old Net.[4]

Stress had built up from the signing away of Hong Kong by Britain in the early 80s, especially since China would only recognize the citizenship of pure Chinese. All the HK-born Indians, Gwailo, Malays, and Vietnamese would be countryless. Canada, the USA, and Australia received talented immigrants in the late 80s and early 90s as people fled first from the idea of CCP domination, and then from the increasing attacks of the MLC. This pressure also led to the nihilistic Zen comedy Mo lei tau which is still popular today. From the moment of birth, the MLC targeted HK for takeover. They had infiltrators sabotaging banks with smuggled bombs. Then they progressively built up a presence, using the non-unionized labor as an ideological base. The corporations tried to exterminate the MLC meetings, however to no avail. By 1995, most of Kowloon was in a state of Civil War, and the MLC army proper, using guns from PLA defectors and the Khmer Rouge, had taken over Canon. The remaining Corporations tried sealing of Hong Kong Island itself, and the citizens who were able to escape did so. Many of these refugees went to Singapore of Taiwan.

In 1997, Hong Kong was turned over to China from Britain and the MLC spilled over into the New Territories and swept through the countryside to Kowloon Bay. The various Triad mansions in the hills held out as long as possible, but were cut off from fresh supplies of ammo. In addition, the Nepalese Ghurka troops were mostly wiped out, although they massacred many of the enemy. Many of the Triads helicoptered out what they could to Lantau island.

Riots in Hong Kong started breaking out in 1999, with the MLC started battling the Triads and Corporate firms in the region. Not long after martial law was declared.

For the first time, many of the Triad leaders put aside their differences in the face of their common enemy. They turned the Wan Tuk shipyard into a miniature naval base to carry out attacks on the mainland. By this time, the HK Island forces, including those Ghurkas remaining, had demolished all the tunnels and bridges linking the island to Kowloon. With the ships they could muster, they kept the MLC limited to the peninsula. The MLC blew up or burned down many hotels, but mainly they just destroyed the power systems, and shipped off the remaining people to the New Territories and northwards to work the farms.

The corporations and Triads were capable to keeping the MLC to the mainland, but couldn't counter-invade. Even the regional forces of WNS, Arasaka, EBM, WorldSat and the Triads could only do so much against nearly a million invaders. After long negotiations, the corps and Triads joined forces and started building up a re-invasion force in 2010, led by Ghurka Col. Gaje Gurung. There were some setbacks, such as when Sun Yee On's Big Len "accidentally" captured an incoming shipment of Arasaka arms.

When Hua was assassinated in 2013, the Neo-HK army raced across Victoria Harbor and fought their way through Kowloon. They did find long-standing pockets of resistance to the MLC between themselves and the PLA, who retook Canton. After Liberation, the Neo-HK army ghurkas privatized; the Triad-Corp alliance disbanded, and everyone went back to their old system of covert trade..

The New Territories were a PLA occupied no-go zone. Lantau island was still the Triad stronghold, but with the Taipans sectioning it off among themselves. The large corporations who stayed had pretty much taken over Hong Kong Island with corporate housing on the mid-levels of the peak and offices on the Bay. Workers use the Travellator (escalators and moving walkways going down the 60 degree slope of the peak) to get from their beavertowns to corporate center. Arasaka had Chai Wan and Shau Kei Wan, WNS owned Quarry Bay and North Point, WorldSat had the Peak, Pok Fu Lam and Mount Davis, and EBM owned everything from Kennedy Town to Central. Wanchi and Happy Valley is reserved for the Neo-HK Mercs, and Causeway Bay is the business center of the island. The need for more space in Victoria had led to the reclamation of land in the Harbor, and Arasaka had their office on the new land.

After Liberation, Militech (along with the PLA) set up a regional HQ on the peninsula in Kowloon City, with company housing in Jordan Valley and Ngau Tau Kok. Their building was directly across the narrowest part of the bay between Arasaka and Militech. Returning businesses got to choose between the various wrecked districts on the peninsula. Even if they had offices on the island before the invasion, they were considered to have given up their land rights when they fled. Cheun Kong Holdings, Kadar, the various CITIC divisions, Mitsubishi and the banks were in the process of dividing up the areas from Kowloon Tong district eastwards. The west side of the peninsula includes the Walled City, and many small businesses and residential areas. This where the Triads had rebuilt, and is under their influence.

Tsimshatsui is the location of the infamous Harbor View Strip. A variety of unlicensed businesses have sprung up since Liberation, with a plethora of black-market doctors, ripperdocs, arms merchants, etc. The Public Security forces are still rather weak here, and somehow the locals usually know when crack-downs will occur. Rumor has it that there are powerful Netrunners (AI's?) who help out the Triads. No official confirmation of this rumor has been made.[3]

The Ghurkas who defended HK for years under the Brits, and then under the Corps, privatized after Liberation. Every year they recruit 200 teen-agers from their native Nepal, and train them in the fighting style that made them legend for the last 300 years. Ghurkas are small, fast, and fierce as pit-bulls. There have been many recorded cases of Ghurkas practically shredded from shrapnel and bullets still killing people in hand to hand combat, beheading them with their Kukri knives.

Currently there is one battalion (450 troops) on HK island, under the command of Col. Gurung. Another 1500 are on assignment around the world as bodyguards, in small tactical units (in Cambodia and Australia), and even a full battalion guarding the Sultan of Brunei. Ghurkas are known by their short stature, their Cybereyes that turn red in battle, and the kukis that they all wear.[3]

Hong Kong has a subtropical climate with four seasons, and weather strongly influenced by two monsoons: the north-northeast monsoon from October to March and the south-southwest monsoon from April to September. Spring – from February to April – is warm and humid, with average temperatures of around 23°C (73°F). 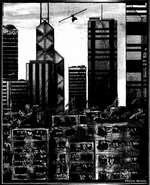