Cyberpunk 2020
Cyberpunk Red
Cyberpunk 2077
Hanako Arasaka (荒坂 華子) is the third child and only daughter to Saburo. Hanako is a skilled netrunner and the head of the Kiji (雉) Faction of the Arasaka Corporation.[2] She is loved by many people and often described as sweet and beautiful in the eyes of many Arasaka employees. Hanako is an intelligent woman who didn't agree with her father's ambitions and had her own agenda she planned to follow. Despite knowing what her father's wishes entailed with her, she still loved and didn't want to displease him.[3]

Her relationship with her brother Yorinobu is one of great importance to her. Through her strong and calm demeanor Hanako is able to command and lead with great pride for her work. Hanako became the figurehead and CEO of the Corporation. Although her digital projects were what drove her, Hanako was the only one who understood Alt's work with the Soulkiller.[4]

Hanako Arasaka is Saburo Arasaka's youngest child, conceived when he was eighty, and the apple of his eye. Hanako was born to Saburo's third and last wife, Michiko, who died shortly thereafter due to complications caused by the birth in March 2, 1999.

Saburo was charmed by his little daughter's stunning beauty, and he decided to raise her in the sheltered confines of the Arasaka Family Compound to protect her from the scarring traumas of life in the exterior world. Hanako received her schooling at the compound through trusted tutors. Although she is a grown woman now, Hanako still only leaves the compound about once a month, and then only under heavy escort. Cut off from the outside world, she learned how to travel and explore the Net instead. Saburo made sure that Hanako was never made aware of the darker side of the corporation, but, through her Net explorations, Hanako was just beginning to suspect the horrible truth.

While Hanako would not leave the compound, the few times she would leave to see Tokyo she was escorted by Shintaro Takayama, the chief of security of the compound, or Katsuo Iwashima, the second in command. Shintaro was like a second father to her and she trusted him more than most. Hanako was also delighted with his stories of ancient Japan he would tell her while she was growing up. Katsuo would escort her when Shintaro was not available and her relationship with him was a pleasant one.

Hanako was a sweet and intelligent woman. She had been chafing under her father's well meaning restraint for several years, but she had never voiced her complaints. She knew that her father wanted to arrange her marriage in order to solidify a corporate alliance, but she secretly dreaded the day it would happen. Hanako never wished to hurt her father, but she had sworn to live an independent life after he died. Hanako's relationship with her older half-brother Kei was strained. While Kei adored Hanako and would do anything for her, she found him cold and threatening and never fully trusting him.[5]

Her closest family member was Yorinobu, her older rebellious brother of the same mother. Hanako and Yorinobu would regularly meet in the Net while he rode with the Steel Dragons.

Hanako was not directly involved in the Fourth Corporate War, however, she was kept under strict protection within he family compound. During these years, Hanako spent most of her time in Ōsaka.[6] After the war ended, despite her feelings towards him, she still attended the funeral of her eldest brother, Kei, who died during the war. Hanako and her father, Saburo, were surprised when Yorinobu showed up to the funeral asking for forgiveness. With her help Yorinobu was able to return to the family.

In the 2040s, as the eldest daughter of the Arasaka family, Hanako had always been a bit of a recluse. As a highly skilled Netrunner, she had always preferred to work on her digital projects, particularly on a revised version of Soulkiller that would allow the transfer minds into clone bodies, she was of one few who grasped the true meaning of Alt Cunningham's work. However, with the death of Kei, the remainder of the Old Guard had unified around her and wanted to continue Saburo and Kei's plans as the Kiji (雉) Faction. They represented the faction that hoped for a peaceful reconciliation with the NUSA with Hanako as their figurehead. She was also instrumental in getting her brother, Yorinobu to finally reconcile with the fractured Arasaka family.[7]

At some point before 2070, Hanako began to run a preserve for the last surviving Japanese green pheasants (キジ) on the island of Shikoku.[8]

In 2077, Hanako left Japan on the aircraft carrier Kujira with her bodyguard Oda, accompanying her father Saburo on his trip to Night City, where he wanted to confront her brother Yorinobu for stealing the Relic from his lab. Concerned for her brother, she offered to speak to him herself, or at least accompany Saburo, who declined both requests. On her question what he planned to do, Saburo could not give her a good answer, however, he let himself be discouraged from annihilating Night City to avoid the talk.[9] After Saburo's death, Hanako planned to give a eulogy for her father[3] during the dashi float parade in Japantown during the local Aratama-matsuri festival[10].

During the festival, Hanako was confronted by her father's former bodyguard Goro Takemura, who wanted to talk to her. When she refused, he abducted her and took her to an abandoned apartment building in Vista del Rey, where he attempted to reason with her. Hanako refused this along with the offered tea. Only the merc V, Takemura's ally and eyewitness to Saburo's murder, was able to tell Hanako the truth: that her father had been killed by her brother Yorinobu. However, at that point of the conversation, Arasaka soldiers led by Adam Smasher burst into the building, securing Hanako and destroying the floor in the process.

Upon returning to the Arasaka compound, Hanako sent a proxy to speak with V, who was forced to flee the city and go into hiding in the Sunset Motel in the aftermath. Now convinced, she offered to work together. Claiming that her hands were tied, she tasked them with acquiring a copy of Soulkiller, then contact her on her private line. Once all the peices were set, she would meet with V at the luxury restaurant Embers. When V arrived, Hanako explained the situation: no one truly believed the story of Saburo's poisoning from the start, yet no one (herself included) was willing to stand against Yorinobu. She revealed she loved her brother too much to stand against him until she realized he had sent the assault team to kill all people present - her included. At this point, Hanako offered to save V's life in return for their testimony in front of Arasaka's board of directors. The conversation ended somewhat abruptly when she was called back to the Arasaka Estate in Westbrook.

If V asked Panam for help in Nocturne Op55N1:

Yorinobu Arasaka confirmed that Hanako was among the victims from when Alt took control of Arasaka Tower, vowing to find those responsible for her death.

Hanako disappeared from the public. News reports included a statement from Hanako that she was grieving for her father and needed time away from the spotlight. The fate of the Arasaka family and company was unclear, as Yorinobu returned to the Tokyo headquarters.

If V asked Hanako for help in Nocturne Op55N1:

Hanako informed V that she would meet with Goro Takemura and Anders Hellman to rescue her from the Arasaka Estate. During the rescue she informed the group of the security forces and once they were successful they took off in an AV for Arasaka Tower. Hanako spoke with V as she took them through Saburo's office to then later meet with Saburo Arasaka as an engram, the three had a brief discussion before Saburo told Hanako he was ready. Afterwards she went to meet with the members of the board and faction leaders so that her father could confront them and they could learn the truth of Yorinobu's betrayal. During the meeting Yorinobu began a military coup of the corporation killing all members of the board except Hanako and Michiko Arasaka. Hanako along with Goro Takemura and V stormed the upper echelons of Arasaka Tower to dethrone Yorinobu Arasaka's tyrannical reign. Hanako confronted her brother had his consciousness overwritten with Saburo's engram, who then lived on to revert all changes by his son while he was acting CEO.

Daughter of Saburo Arasaka and one of the most enigmatic figures in the Arasaka Corporation. Her past is shrouded in secrecy and closely guarded by a team of lawyers prepared to torpedo any journal inquiry into her life. The predominant theory about her early life suggests that she was forbidden from leaving the Arasaka family's residence near Tokyo until she came of age. Only her skills as a netrunner kept Hanako from becoming completely cut off from the outside world. Many also believe that she helped her brother, Yorinobu return to the family fold after his infamous rebellion came to a fruitless halt.

Although Hanako has never held an official position within the company, the buzz around her involvement in behind-the-scenes corporate scheming continues to grow. That said, separating truth from speculation remains nearly impossible. Rumors about Hanako Arasaka never last long. And neither do the people who spread them.[3]

This beautiful, elegant, delicate woman is Saburo Arasaka's youngest child and only daughter-thus elevating her into the ranks of the world's most powerful. Born when Saburo was already eighty years of age, she became the apple of his eye. Fearing she would get beaten and bruised in the many Arasaka Corporation backroom brawls, he chose to keep her in a glided cage rather than prime her for the family trade. However, this prison of over-protection could not keep her spirit contained. She became skilled in netrunning and eventually assumed powerful roles as keeper of the company secrets and trusted representative of her father's interests. Yet, in the wake of Saburo's death, all she had known threatened to unravel around her. Hanako lives in an entirely different realm than V. Ethereal and otherworldly, she has never had grime from the street besmirch her clothes or the imperfections of age or illness pock her body-the latest and greatest marvels of cosmetic engineering have always been at her back and call. Her entire essence is one of dissonance: age without aging, power without agency, family without real intimacy or trust. 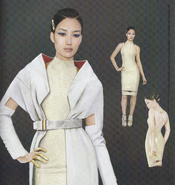