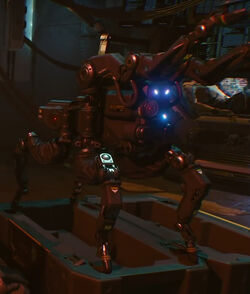 The Flathead (MTOD12) is an experimental military grade unit for surveillance and reconnaissance missions. It was originally stolen by the Maelstrom gang, but Dexter Deshawn sends players on a mission to recover it for himself.

As described by Maelstrom gang member Dum Dum, it is state-of-the-art, coming without a standard port and with titanium-fiber actuators. It has dynamic camouflage armor and motor impulses rivaling that of the human nervous system. When demonstrating it, Dum Dum remotely pilots the spider-like bot around the room, having it scale walls.

In the E3 2018 trailer DeShawn's seen finishing the deal on the Flathead.

The Flathead was intended to be used as a companion for Techies, but as Netrunners and Techies had many overlapping abilities they combined them into one skill tree. Thus it will no longer be a companion for the player.

Retrieved from "https://cyberpunk.fandom.com/wiki/Flathead?oldid=23054"
Community content is available under CC-BY-SA unless otherwise noted.