Cyberpunk 2077
I like to know everything about the people I work with.

Evelyn Parker was a doll living in Night City.

Evelyn Parker's intelligence and ambition drives her to demand more from life. Her goal of becoming a professional actress, and her rational head for the biz, led her to a job at the doll house Clouds, but this stepping stone in her career quickly became something much more permanent.[1][2] It was in her days at Clouds where she met and befriended Judy Alvarez.[3]

In 2077, Evelyn was a frequent guest of Yorinobu Arasaka at Konpeki Plaza. The Voodoo Boys learned of this and hired her to acquire a braindance recording of Yorinobu's suite for a planned heist. Evelyn realized that the Voodoo Boys were after a biochip known as the Relic which contained Johnny Silverhand's engram and was in Yorinobu's possession. And so she decided to steal it for her own profit and contacted NetWatch, offering to give it to them in exchange for money, protection, and a new identity.[4][5]

Evelyn contracted the fixer Dexter DeShawn to plan and execute the heist of Konpeki Plaza. As a part of the team DeShawn picked, V was introduced to her, playing an important role in researching the material from a BD (with the help of her friend Judy), evaluating the dangers and negotiating the terms of the business contract. Due to knowing DeShawn's fixer history, Evelyn trusted V with an alternative offer - eliminating him entirely from the heist equation and gaining a bigger slice of the resulting profit.[6]

Once the events of the heist proved to cause more mess than gain, Evelyn laid low for several days at Lizzie's Bar, under the protection of the Moxes, but eventually decided to return to work at Clouds. There, while she was with a client and connected to the Net, the Voodoo Boys launched a powerful virus on her to try and silence Evelyn since she not only worked behind their back but knew too much of their plans. She managed to survive the attack, but her cyberware was damaged beyond basic function, rendering her comatose yet aware of her surroundings. The caretaker of Clouds Oswald "Woodman" Forrest attempted to have her restored. After no success he raped her, taking advantage of her unconscious body. After no longer being able to provide what he was after, he decided to pawn her off to ripperdoc Fingers for one last attempt to fix her cyberware. When Fingers failed, Woodman wrote Evelyn off and left her with the ripperdoc as payment. Fingers eventually contacted his fixer, Wakako Okada, and sold Evelyn off to the Scavengers to be used in the production of black market snuff BDs. However, after recognizing the potential of Evelyn's high-end doll and BD cyberware, they instead kept her alive through multiple BDs, forcing her to endure unspeakable situations one after another.[7][8]

Evelyn was eventually located by her friend Judy, with help from V, in an abandoned power plant, but she remained in a comatose state. From there, she was taken to Judy's apartment to remain under her care. Her condition slowly improved, unfortunately resulting with her not being able to overcome the events which had transpired, leading her into suicide. Prior to death, Judy managed to recover additional braindance recordings from her memories, including the multiple rapes by Woodman, the brutal abuse that she suffered from Scavengers, as well as the fragments of her dealings with the Voodoo Boys.[8][4][9]

Evelyn was cremated and interred at the Columbarium. Her epitaph reads: "She died valiantly fighting the system."[2] 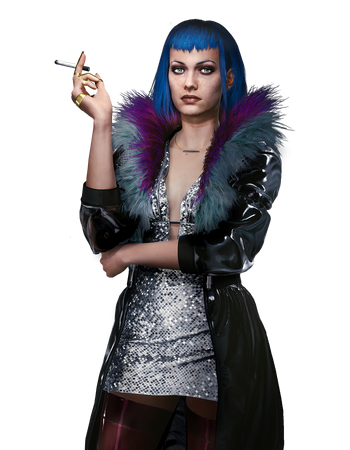 Evelyn is a beautiful enigma. At first glance, she's nothing but riddles and contradictions; while Evelyn looks like a high-ranking corpo, she arranges a meeting in some streetgang dive bar. She seems to be a rich worldly woman, but she rounds up a rag-tag bunch of rookie mercs to swipe something for her. Humorous and charming, yet she drives a hard bargain. Puts her faith in professionals, but still wants to pull all the strings.

When it comes to Evelyn, only one thing is certain: tread carefully. Her beauty, cunning and fierce determination are a volatile mix.[2]