Cyberpunk 2020
Cyberpunk RED
Cyberpunk 2077
The European Economic Community, also known as European Economic Area, European Community, United Europe, European Union or simply Eurotheatre, is a trans-governmental political and economic organization consisting of several major European powers. Though "European" in name, the EEC also welcomed the possible membership of any countries beyond the European continent; especially those were considered to have global influence. However, the only such superpower that ultimately accepted this offer was Japan, as the United States was still trapped in its own deeply paranoid sense of isolationism at the time, and thus declined the offer.[1][2]

The European Economic Community, or EEC, is a political and economic group whose membership encompasses all of Western Europe, with the the major players being France, Benelux, and Germany. As is seemingly-universal in the world, money plays a substantial role in how the organization conducts its operations. Specifically, the overall wealth of a country determines the level of influence its representatives have in the EEC's Euro Council. The richer the country's economy, the greater the influence. At the center of its operations is the EuroBank, one of the largest and most powerful banks in the world, which much of the EEC's economy depends on, as well as the economies of other places around the world. The EEC is also responsible for the Euro Space Agency (or ESA), the world's largest and most advanced space-faring organization.[3][4]

Each European country has its own elections, with the lone exception of the United Kingdom (which remained under martial law). These elections are held for control over local governments, each of whom in turn send representatives to the EEC. The politicians selected during these elections ultimately handle issues local to their specific country, mainly how to spend their chunk of the EEC tax money. They are held responsible for the smooth running of local, day-to-day operations and the control of public services, but this does not always prove easy. Oftentimes, many of these services are outsourced, and provided by contracted companies. Finally, the local politicians are responsible for forwarding requests to the EEC for grants and funding.[4]

The national governments of a European country are responsible for the taxation and policies that are not covered by the EEC's directives. Many National Governments also work hard to push their projects to the EC, in an attempt to attract major developments and contracts in their country.

Additionally, even though it is not geographically part of Europe, Japan was known to take part in this system of elections for more than twenty years, until it was ultimately kicked out of the EEC.

Headquartered in the Benelux region of Brussels, the European Economic Community guarantees that all member states have a representative count directly proportional to their economic wealth; each nation is granted one council member for every hundred million eurodollars in wealth. Unsurprisingly, this causes a significant power disparity in the organization, as it means poorer states who cannot provide the funds for more councilors are left with far less influence over the organization than countries like France, Germany, or Benelux who hold the most wealth the in the EEC, and therefore exert the most influence over the European Council.[4] Elections for councilors are held every four years in November.

From 2018 to 2022, the Council consisted of 536 members who had the ultimate decision-making power in Europe. Within the council there are also grades of power. The Speaker is effectively in charge of the Euro Council, with last word on all major debates and issues, while also deciding who will speak and when they will speak. The Assistant Speaker has the power of the Speaker in the former's absence. Both the Speaker and the Assistant Speaker are selected by a majority vote from the other members of the Council. The leaders of the various unofficial voting groups exercise considerable power. Each group has senior members, as well as what are known as Sprinters who are usually younger members.

The EEC has fairly solid relationship with most of the world. Relations with the newly-reformed USSR have improved greatly since the Cold War Era, though much of that relationship is primarily the EEC taking advantage of Eastern European countries for their cheap labor and land. The EEC's relations with North and South America are considerably more sensitive, as Canada is the only country in the region with whom they are on good terms. Mexico is seen as a country prone to constant and violent political swings, and is much less stable than Canada. The NUSA is on extremely tense terms with the EEC, ever since the Gang of Four waged a propaganda campaign against Europe during the conflicts of the 1990s, in which they used jealousy of the better conditions in Europe to give US citizens someone other than their own government to blame for their misery. When it comes to Asia, the EEC has a normal competitive relationship with the various countries, although Japan remains a big rival of the EEC and has been known to fight against some of its member countries, such as with Germany during the Yen War of 2015. While the EEC attempted to limit the spread of international megacorporations in Europe, Arasaka Europe, a subsidiary of Arasaka, was nevertheless able to thrive in the European market, as were several other Japanese and Korean corporations.[4]

In 1992, the European Economic Community was established with a common currency called the Eurodollar, whose stability lead to it becoming the official currency in several non-European nations. Zones of Control and protective tariffs were established by the EEC as a means of regulating and administrating the activities of member nations. The regulated activities of the member nations included those of France, Germany, Britain, Japan, and Italy.[5] The US, however, was refused entry because of isolationist and protectionist policies of the ruling Gang of Four making it the only superpower at the time to not join.[1][2]

The core nations of the ECC decided against the resistance of the other European nations, to bring the ECC into existence. A period of economic turbulence followed in Europe, especially in France and Great Britain. This resulted in labor uprisings and general rioting.

Not till long, the EEC exposed the manipulation and uses of sabotage the US was attempting in Europe to undermine their power. This led to the crash of '94 and the collapse of the United States.

In years to follow, Japan, as a growing superpower, saw corporate greed turn its government corrupt as internal powers fought against each other for control. Ten years manipulation and mutual sabotage led to Japan being removed from the EEC in 2015. The New Yen currency was established to counter the Eurodollar (exchange rate is 200 Yen for 1 E-buck). The Yen War began in Europe, with Germany aiming to limit international corporations in Europe.[5]

The Eurotheatre had been hurt by the Fourth Corporate War and the subsequent loss of its ESA and Orbital colonies to the Highriders. The World Stock Exchange and the Common Market managed to maintain a stable economy in which most of the European nations participated, with the exceptions of Italy, Spain and Greece, which all ended up suffering violent, chronic political upheavals. The international Corporations still had a great deal of power, however with the War many of the European nations kept the Euro business barons under control.

Great Britain, however, suffered major economic trouble massive amounts of immigration and an antiquated technological base, its streets were almost as explosively dangerous as that of the United States. The time of rebuilding hit Europe hard, as individual nations struggled to repair the damaged financial and industrial hubs affected by the War.

By 2077, the Netherlands and Belgium fell victim to widespread coastal flooding caused by rising sea levels. Refugees from the two countries tried to seek shelter in Scandinavia by boat, but were refused entry. The Swedish Navy sank some refugee boats to pressure the rest to turn back.

That same year, Switzerland announced it had automated 90% of its military with the exception of its officer corps. The government planned to phase out the officer corps and reach 100% automation by 2080, fulfilling the country's dream of achieving true neutrality, as an automated military could be programmed to only defend the Swiss border and never act with aggression toward neighboring countries.[6]

Map of Europe during the 2020s 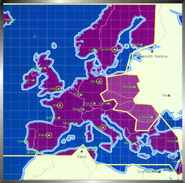 Data term map of the Eurotheatre during the 2020s