By 2045, Elflines Online was developed by Segotari as the launch title for their new RUSH REVOLUTION interactive Braindance headset. It became quite popular amongst the citizens of Night City and elsewhere.

Since its release, the game has already created a generation of inspired fans, and has grown to have its own television show as well as plush toys and a limited edition of "Sacred Herbs" Kibble (including a collectible packaging) made by Continental Brands.

The game is found on CitiNet servers, where players compete for the best items they can get, and be the first to make boss kills.[1]

A TV show known as The Elflands Online! Chronicles was broadcasted by Network 54. It was described as a cheesy, but surprisingly well-shot series about Daedalus, a netrunner who gets trapped in a mystical fantasy world after finding a strange Night Market, in which he loaded a mysterious Braindance chip.[2]

Long before the events of the game, the Elflands, populated with magic elves, were protected by a hero. However, the hero died, and evil forces returned to destroy and take over the land, bringing the plague of miasma with them, which steals the elves' magic. In the time when the game is set, new heroes are rising up, seeking to return the Elflands to its former glory, and hoping to become the new hero of the land.[1]

A copy of Elflines Online costs 50 eurodollars, and another 500 for the Segotari RUSH REVOLUTION® interactive Braindance headset. A subscription for a single character costs 20€$ a month, and is included in every lifestyle starting at Generic Prepak. Edgerunners who have Good Prepak and higher lifestyles are able to have as many characters as they want, and can almost always pay to remove "Revive Sickness" from their characters without having to care about the costs.

The in-game currency is called gp, and 100gp can be bought for 1€$ at any time while playing to make in-game purchases.[1]

Miasma is an important game mechanic. Excluded from major cities or player camps, Miasma can be found anywhere in the game. It mainly has two effects: it can suspend the elven healing acceleration once it has stabilized, preventing treatments, and it unlocks PvP in the area, meaning if you are killed by another player who is not from the same Elfine server, they get rewarded with a 1000gp from your 2000gp death tax or from your payment to remove Revive Sickness.

If a player is outside a Miasma effect area, if stabilized, their health heals back to 100%.[1]

Reaching Rank 3 with any character unlocks a title for said character based on the stat they chose to increase the most:[1] 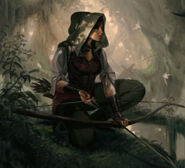 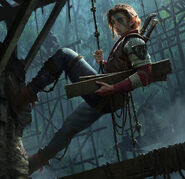 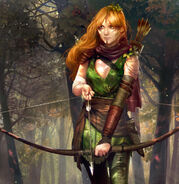 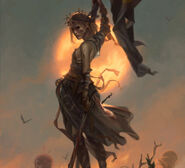 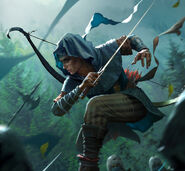