7.53 billion
Welcome to the Space Age. Humans have left Earth, but not abandoned it.

Earth is the third planet from the Sun.[1]

Earth is the home of humanity. The corporations have taken over the world from their skyscraper fortresses. At the same time, massive armies of cyborg killers roam the shattered urban ruins of deserted cities. Countries have collapsed in more ways than one. Corporate Wars have ruined the economies and rebuilt them again. The New United States is divided, Japan is the biggest empire on the planet, China has become a rising power, the Soviet Union infights, and the EEC is looking to the stars for expansion.

Corporations like Arasaka, Militech, SovOil, and many more are the rulers of Earth. It may be the homeworld of humanity, but with companies like Orbital Air and Mitsubishi/Koridansu creating new worlds outside, they promise a new positive future for those who go off-world.

Humans' expansion into space started through the ESA (Euro Space Agency) building the Crystal Palace, the Soviet Union followed after with their presence in space being limited but noticeable. The ESA owns much of what can be found in space from the cities on Luna to the space stations. JAB also has a presence in space with many work stations being built by them.

The Arasaka Corporation operates facilities in orbit, one of the more known ones being the Arasaka Orbital Station.[2]

North America suffered from many disasters of the 1990s. Economic collapse, bioplague, global warming, and corruption led to the downfall of the the United States of America. By 2045, although no longer a superpower, the NUSA is positioned in the same way as Europe and Asia are after the Fourth Corporate War. Combined Operations Groups maintain the government, but others had seceded from the NUSA, and have become mercenaries, independent kingdoms, or act in their own self-interests.[3] The NUSA itself is reminiscent of the Wild West of the late 19th century, with a civilized East Coast and an uncivilized West Coast.

Central America emerged from the first and second Central American wars as a union of independent states working in mutual cooperation, having expelled the United States from most of the region, aside from the Panama Canal Zone. South America came out of the Fourth Corporate War as a means for nationalist factions to bid for land and influence, shattering an alliance that had only begun to rebuild by 2045.[3] This culminated in the formation of the Organization of American States (OAS), led by Argentina, Brazil, and Chile - a world power on par with the European Union.[3]

By 2045, despite being heavily affected by the Fourth Corporate War, the World Stock Exchange and Common Market remained stable, allowing most European nations, excluding Italy, Spain, and Greece, to maintain stable economies, having the corporations supplanted by European business barons. Great Britain suffered major economic troubles, amplified by immigration and antiquated technologies. The rest of Europe was recovering from the Fourth Corporate War, rebuilding financial and industrial hubs affected by the War. The USSR and the rest of New Russia had fallen to a point of being unable to feed the population, as well as a similar lack of modern technology.[3]

The MidEast Meltdown of 1997 left many Middle Eastern nations as radioactive wastelands, with only Egypt, Syria, and Israel surviving due to their ruined states, being left alone during the Fourth Corporate War. By the 2020s, the impacted areas had become safe enough for scavengers, as well as other individuals willing to traverse them, to scavenge and collect hardware and valuables from the ruined fields. By the Time of the Red of 2045, alliances and power blocs were being formed or reformed to ward off invading foreign nations wanting to mine the remnants of Meltdown-afflicted nations.[3]

The Asian continent saw the rise of new world powers. By 2020, Japan was the largest economic power in the world with many corporations holding much power over the third world nations. The Arasaka Corporation, the most influential megacorp in the world, is headquartered in Tokyo and controlled much of it's politics. A united Korea was formed in 2005 as the country saw much success from it's economy with the help of it's corporations. China became a rising power and allied itself with the NUSA.

By 2045, the continent had been heavily damaged, recovering from various Fourth Corporate War actions, such as the biological attack and total destruction of Hong Kong, and battles across the South China Sea and Mongolian Plateau for China, Japan was still recovering from the Arasaka Corporation's attempted coup, and North Korea collapsing into warlords and fiefdoms, with South Korea becoming isolationist. The Philippines and Australia had been damaged and isolated from the fighting as well. Despite this, the nations of Asia managed to sustain many necessities and luxuries lost or harder to attain after the Fourth Corporate War. Preparedness for ecological shifts, a conversion from coal and oil power to American-like CHOOH2 algae farms, and birth control programs to reduce excess population growth managed to put Asian cities and nations into a position of comfort and security, although lacking personal freedoms common in other nations.[3]

New Africa had been reborn by the Fourth Corporate War as a space-dominant nation, being unified by the European nations of the Eurotheatre. The Highrider nation had formed, declaring their sovereignty and space control from the rest of the world, due to most space workers, spaceports, and construction areas being on African soil or otherwise African-related.[3]

The View From Space

At the Near Earth Orbit Zones, the skies are crowded with much space traffic and very busy Orbital Transfer vehicles unloading cargo into space shuttles as well as spaceplanes docking the various spider-webbed girders of habitats and stations around planet Earth. There are nearly 200 factories in Orbit around Earth, some are owned by the powerful Japanese corporation Mitsubishi.[1]

Not many corporations have entered orbit besides transportation that takes cargo from different parts of the planet. There are plenty of airport stations that will transport people to other colonies in the Sol System.

The Low-Near Earth Orbit, commonly shortened to LEO, zone of the Earth contains light traffic, comprised of orbital space fighters and satellites, shifting from the LEO zone to the Geo-Syn zone, dictating everything from communications to battling. The zone ranges from approximately 1,000 to 3,000 miles, or 5 to 5.5 kilometers.[1] 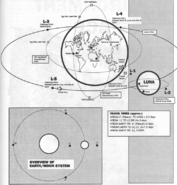