Dex
Black Jesus of the Afterlife[1]

Cyberpunk 2077
'Member our first convo? Seems I've chosen the quiet life, after all. No blaze o' glory for me.

Dexter DeShawn, commonly known as Dex, was a well-known fixer in Night City. In 2077, he recently returned to the city after spending a few years off the grid. He has never personally worked as a mercenary before becoming a fixer, but had no need to thanks to his charisma and keen eye for potential.[2]

Dexter DeShawn made his name as a prominent fixer in Night City, considered one of the best in the business, though not quite on the level as Rogue Amendiares. He was known to select mercs for gigs based on his intuition, and did not have a regular crew. Dex suddenly left town in 2075 on what is rumored to have been a vacation, but according to Royce, he had ruined half of Pacifica and made a lot of powerful enemies who wanted him dead. He returned in 2077 and was contracted by Evelyn Parker to steal the Relic from Yorinobu Arasaka, so she could sell it to the Voodoo Boys. He hired T-Bug, Jackie Welles, and V to handle the heist at Konpeki Plaza, but insisted on limiting their cut of the payout to a mere 30% since they were new on the scene. To prepare for the heist, DeShawn paid €$10,000 in advance to buy a stolen Militech Flathead from Maelstrom, and also shelled out for the Delamain "Excelsior Package" to cover Jackie and V's escape.[2]

After the heist went sideways due to Yorinobu's unexpected murder of his father, Saburo Arasaka, V managed to escape and meet Dexter at the backup meeting location, the No-Tell Motel. Dexter was furious that V had brought so much heat on him, and personally killed them, before having their body dumped in the municipal landfill east of the city. Needing to leave, DeShawn reserved a seat on a shuttle at Orbital Air Space Center for the next morning, but Saburo's bodyguard Goro Takemura tracked him down before he could make his getaway. Takemura forced DeShawn to lead him to V, whom he believed was Saburo's murderer, then unceremoniously killed the fixer with a single shot to the head as DeShawn tried to bargain for his life.[2]

Word traveled quickly in Night City's underworld that V botched their job and their fixer died as a result. While V was able find work with several local fixers in Night City in spite of this, the so-called "queen of the fixers", Rogue, refused to recommend V to her clients on principle until their street cred improved. Dexter's body could later be found in the landfill in the same spot where he died. V could recover his iconic pistol, the Plan B.[2] 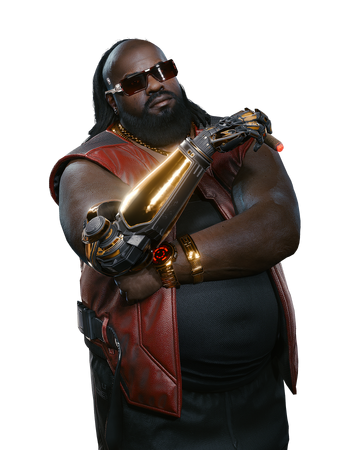 Dex never shot hoops, jumped roofs, or pulled a trigger. Likewise, he never felt the need to plant his fat ass in a netrunner's chair or splice cables in a sooty garage. Wait, never pulled a trigger? Yes, that's right, Dex never popped lead in his entire life. People - that's what Dex was good at.

Dex is one of the biggest fixers in Night City. He's a pretty big deal, both literally and figuratively. Word on the street is that there were complications from his last job, but that's just the nature of biz, ain't it? Besides, when someone like Dexter DeShawn has a gig for you, you don't ask questions - you just shake on it.

Dex is killed by Takemura.

Dex with Oleg and V in the E3 2019 Cinematic trailer 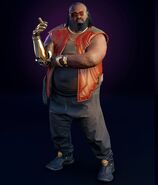 Dexter DeShawn in the cosplay guide