Danger Gal[1] is a private investigation, bodyguard, and security company headquartered in Night City; within the northwesternmost section of Little Europe. The detective firm was founded and is led by Kei Arasaka's daughter Michiko. They have tactical and exotic cat outfits.[2][3]

Danger Gal is a carefully constructed company. While Michiko's clients are all well-heeled and socially prominent enough to pay her astronomical fees, the company also has access to a slush fund provided covertly by President Kress, as well as access to much of the covert databases left behind in the Arasaka estate in New Westbrook. For two decades, Danger Gal had been making headlines with its high-society cases and daring exploits, all the while playing a lethal undercover chess game against the warring factions of her deadly family.[2]

Between 2023 and 2025, the Arasaka Corporation faced defeat at the hands of the U.S. military, the megacorporation was forced to pull almost all its operations back to the core zaibatsu in Japan.[2] The then CEO Kei Arasaka, eldest son of the family-owned business, was presumed dead which threw the control of the vast corporation back into the hands of the family patriarch: the centenarian Saburo Arasaka. Even at 105, the elder Arasaka had not lost his ability to plan strategically, or to inspire both loyalty and utter terror into his subordinates.

During this time Kei's only daughter, Michiko, faced her own dilemma. The family company she was apart of her whole life was now hated worldwide due in part by being one the instigators of the Fourth Corporate War, as well as having a reputation for mass-murder based on the accusation that they had detonated a nuclear device in the center of Night City. Michiko, as a sheltered seventeen-year-old high schooler, had known very little of her elder family's world-spanning machinations and her father had made sure to hide the unsavory side of the family business. With the Arasaka Corporation now banned from the Americas, Michiko had faced being deported to Japan, as an American-born and raised teenager, the nation was utterly alien to her.

Michiko's solution was to lean heavily into her strengths.[2] In 2025, a 17 Michiko was young, adorably cute, and possessed a high IQ. She already had thousands of devoted young fans all over the world who were willing to take it as her being an innocent bystander who had nothing to do with her family's corporation. She started by traveling to Washington, D.C. to meet with President Kress to one make an apology for her family's participation in the conflict and then to plead her case to remain an American citizen. Michiko's meeting proved successful and was able to remain in America to finish her high school career and then enter Stanford University, where she majored in criminology. She graduated three years later, and started her own business as a private detective.

Danger Gal was the name of the company Michiko founded. On the surface, it was a private investigation firm specializing in cases for celebrities and other important clients. As the perky, unstoppable head, Michiko was a staple of parties and events from New Hollywood to the hot spots of recovering Europe. Her visible naivete and irrepressible charm disguise the fact that she was also a highly competent criminologist. It also obscured the fact that behind the scenes, she was fulfilling one of the directives she agreed to perform as part of her deal with Elizabeth Kress to remain in the United States: to locate and dismantle any Arasaka operations in and around the country.[2] 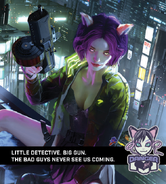 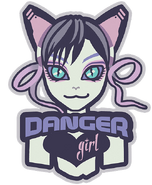