Cyberpunk 2077
A fixer's worth no more and no less than their last promise.

Dakota Smith is a member of the Aldecaldos and one of the best fixers found in the Badlands, on the outskirts of Night City. She can be found spending most of her time in her own garage in the Rocky Ridge plains.

When asked about the vast emptiness that are the Badlands, she is quick to oppose the thought, briefly elaborating how the various factions, the nomads, Raffen Shiv, corporations, and drifters in fact form a type of an ecosystem. The type that would not survive should one of them get removed.[2]

Despite being a nomad, she explains her staying put as being a Static. From her tone, it's easy to tell the name is not one to assign as a compliment, although she adds that statics too are necessary - they take care of those who come and go. She does not deny earning from this duty.

Through a gig message briefing, it is possible to learn that she is the eldest daughter of the Pomo tribe, and the eldest fixer of the Badlands. However, we only have her word for it.

If guided by the messages V receives, judging those leaving the pack would indicate that Dakota boldly opposes detachment from the nomad life, even if it means confronting an enemy.[2]

Through one of the gigs she employs for V, Dakota admits many failed attempts at cooperating with tech specialist Iris Tanner, comparing her with a mare and showing slight joy now that she has no choice but to accept working together. Even once Iris has been rescued and brought to her garage, Dakota will not gloat but proceed with courtesy, calling her a sister, in hopes to get on her good side, but seemingly fails. However, Iris accepts exchanging favour for favour, which can be seen as somewhat of a success.[3] 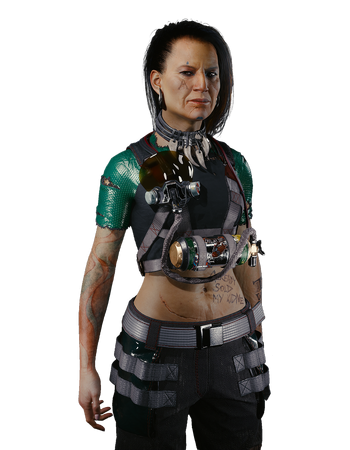 The Badlands' resident fixer and a member of the Northern Californian Pomo tribe. At first glance Dakota seems like a harmless desert-dweller. It wouldn't be wrong to say that sometime after the Unification War, she lost touch with reality – in her free time she deciphers the secret language of smoke. But if you ignore that, she's an extremely perceptive fixer with a mind for biz few in this part of California wouldn't envy. Those who take on her jobs always make sure they're done to a tee – because firstly, Dakota's never gone behind anyone's back, and secondly if they decided to go behind hers, they'd be vulture breakfast in no time. You'll also notice she doesn't go anywhere without her oxygen tank – she's been huffing pure oxygen for a few decades now.[2]