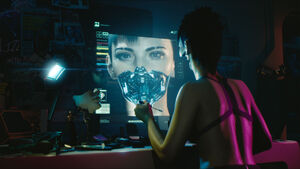 Even though cybernetic prosthetics were originally developed for practical and medical purposes, they've since become a matter of lifestyle choice. In 2077, cyberware has become as commonplace as tattoos and jewelry. The reasons for installing it are many and varied, including simple tech upgrades, combat enhancements, and even fashion statements. The possession of trendy cyberware has become an integral and defining part of Night City culture. Uniqueness is just another form of currency. To make it big, you need to look the part. Style is everything.

At the start of the 21st century, medical prostheses were mainly implants used to replace parts of the body, such as a teeth, facial bone, palate, or joints. Cyberware in the modern day was the evolution of prostheses. In order to save human lives medical science created artificial heart valves, extremities, or vertebras; this to allow the patients who suffered from severe body trauma to function normally in society.

During the First Central American War of the early 1990s, the development of cyberware increased significantly when thousands of American soldiers were coming home severely injured. Medical cyberware became more sophisticated and widespread as technology progressed. Japan and Germany were at the forefront of development and research as the medicine was evolving. However despite the amazing innovations in the medical field and how widespread the cyberware was becoming, it was still expensive. The first prosthetic arm didn't have any fingers, instead it had a crude gripper and the arm as a whole was heavy. These primitive designs of the 1990s are known as the Generation Zero designs.[1]

The Postwar medical cyberware prosthesis development helped to speed up the miniaturization process. Reinforced spines and joints were first designed for workers, air filters grafted in the upper respiratory tracts for those working in polluted environments. Cybernetic enhancements were also produced for warfare during this Industrial Cyberware Revolution during the 2010s. The first crucibles that were designed these combat implants was the Second Central American War, as well as the Second and Third Corporate War. In the US the megacorporation, Militech, enhanced their soldiers enabling their bodies to increase their carrying capacity and direct connections to personal motion trackers and range finders.

An arms race began between private armies that belonged to megacorporations such as Arasaka that still continue in 2077. Generation One cyberware is often found in black markets, usually found in the possession of poor citizens who can't afford anything better. Generation One is usually made of metal and plastic.[1]

The cybermedical market started to boom after the wars. The same corporations that would take part in the wars now saw more opportunities to profit from their lines of medical implants. Cyberweapons were also developed during this time.[1]

V has cyberware that can be installed, exchanged and improved at ripperdocs available in Night City. There are also three categories here that can be distinguished:

The player then installs the cyberware of their choice in different slots in V's body:

Comparable to other items, there are common, uncommon, rare, epic, and legendary cyberware to acquire. Some cyberware exists in different qualities, others may only exist in epic form.[2]