Cyberpunk 2077 is an upcoming role-playing first-person shooter video game, being developed and published by CD Projekt RED. The game was announced during the 2012 CD Projekt Red Summer Conference as the official video game adaption of Mike Pondsmith's pen and paper RPG Cyberpunk 2020. Originally titled Cyberpunk, the 2077 subtitle was added in late 2012.

Cyberpunk 2077 is a continuation of the events of Cyberpunk 2020, taking an alternate path to that of Cyberpunk V3.0. The game is set in the dystopian metropolis of Night City. It is in the Free State of Northern California. Night City is located south of San Francisco around the area of Morro Bay, CA. During Cyberpunk 2020, Night City is said to have a population of more than five million inhabitants. However, this number is suspected to be considerably larger in 2077.

Following an economic collapse sometime during the early 21st century, the United States is forced to rely on large corporations to survive. These corporations deal in a wide range of areas, such as weapons, robotics, cybernetics, pharmaceuticals, communications and biotechnology, and many of these companies operate above the law.

The game follows the story of V — a hired gun on the rise in Night City, the most violent and dangerous metropolis of the corporate-ruled future. A robust character creator will allow players to choose V’s gender, visual appearance, as well as historical background — all of which may influence the shape of the game.

The world is inspired by the works of authors such as William Gibson (author of Neuromancer) and Phillip K Dick, whose novel Do Androids Dream of Electric Sheep? and subsequent movie adaption Blade Runner heavily influenced the creator, Mike Pondsmith, in creating the original tabletop RPG.

Cyberpunk is an open world, non-linear RPG with an FPS style in which players are able to heavily customize their character to suit their play style. Gun play, exploration, player choice and activities such as hacking are to feature heavily throughout the game with missions, quests and objectives being completed in a variety of different ways.

One such example of gameplay is non-english speaking characters featured throughout Night City. Players may be required to purchase a translator implant to understand them, with varying levels of success based on the implant they buy.

The game was originally stated to be a single player experience with multiplayer elements. It was reported in early 2018 that the multiplayer components may have been scrapped,[1] however in June 2018 CD Projekt stated that they had multiplayer "in R&D" but it would not be included for the game's launch.

The world will have dynamic weather and a day/night cycle to make it truly immersive.

The game is played primarily from a first-person perspective. A new combat system has been developed around this perspective that includes the use of guns, melee, powers, and even combat stimulants that grant additional bonuses, such as increasing speed. Players may choose a third-person perspective whilst driving vehicles, such as cars and motorbikes. Although players can utilize flying machines, these are all automated.

Player characters will have attributes like Strength, which can be raised via leveling and installing cyberware. Skills and perks can also be selected; skills are related to performing actions - such as hacking, crafting, specific weapons, etc. - while perks can be unlocked with both Street Cred and XP.

During character creation, instead of choosing a predefined gender, players now choose a body type that is customizable and can pick between a male sounding or female sounding voice.[2] Other tabs that have further customization options include Birth Record, Biometric Scan (face, hair, scars, coloration), Appearance (style, clothes, makeup, piercings, tattoos, mods), and Biostats.

One can also choose from a set of background stories (Nomad, Street Kid, or Corporate) and other elements to fully flesh out their characters (like childhood hero, key life events, and what drove them to Night City), all of which will have an impact on the game. Selecting a background story doesn't lock a player into that for the rest of the story: if a player decides to betray their original background group, they can do so (like go from Street Kid to Corporate).

Cyberpunk 2077 will feature a fluid class system, where V may primarily conform to a trio of skill trees, allowing the player to choose what best fits their playstyle and experiment, but is by no means locked into a set class.

During the beginning of production it was reported that a team of 50 people were working on it, however after the completion of the Witcher 3 and its subsequent expansion packs, the team has reportedly grown larger, with dozens of jobs being advertised on the CDPR website. In early 2018 it was reported that a new studio had been opened in Wroclaw, Poland to assist in the development of the game.[3]

Cyberpunk 2077 was initially announced to press at CD Projekt Red's 2012 summer conference. The game was stated to release after their then-current project of Witcher 3: Wild Hunt, at an undetermined date in the future.

In late October 2012, the official Cyberpunk YouTube channel released a title reveal video, and then in January 2013 it revealed a short cinematic reveal trailer created by Tomek Baginski. Later that month in 2013 they released a short video of original creator Mike Pondsmith, elaborating on the concept.[4]

On June 10, 2018, during Microsoft's E3 presentation, a brand new trailer with the first gameplay footage was presented to positive reception. Social media and the game's official website received a relaunch with new graphics and details about the game.

Actor Keanu Reeves was confirmed to appear as Johnny Silverhand during a cinematic trailer shown during E3 2019.[5] He then made a stage appearance where he shared his experience of being part of Cyberpunk 2077.

There are four distinct visual styles in Cyberpunk 2077.[6]

The look of a long lost golden age on people entirely unwilling or unable to forget it. It’s flashy, bold and usually cheap – filled with gold-plated cyberware, implants encased in brightly colored plastic and larger-than-life makeup.[7]

The look of global conflict and corporations jockeying for power. Cold, sharp and modern. Making everyone look as if they are ready to drop out of an AV’s cargo door and head straight into combat.[9]

The look of poverty that derives from humans grappling with and struggling against technology and its unforgiving advance. It denotes a lack of design blending with a general poverty of means and ideas.[10] 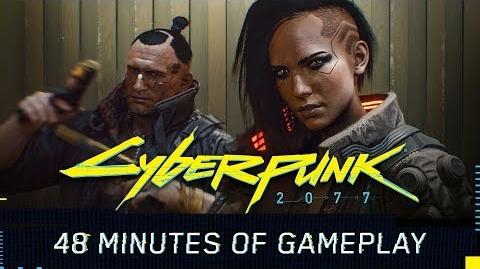 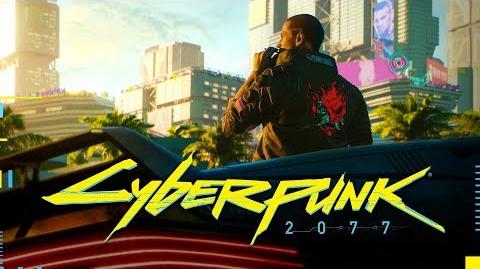 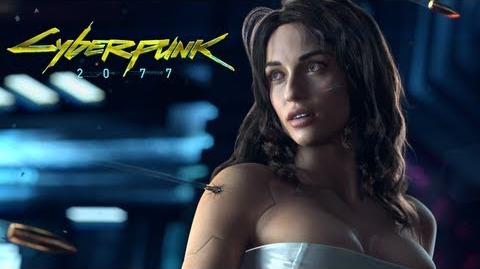 Retrieved from "https://cyberpunk.fandom.com/wiki/Cyberpunk_2077?oldid=12454"
Community content is available under CC-BY-SA unless otherwise noted.