That's City Center – Night City's corporate showcase. Sleek skyscrapers form a brutalist, fortress-like skyline, presenting the unrivaled power of megacorps in all its arrogance. Since 2020, the City Center has become the most fortified and secure part of Night City.

City Center is the real showcase of Night City. The once smoldering battlefield of the 4th Corporate War and nuclear fallout from the Arasaka Tower assault, was now completely restored. Restoration of the district was a lengthy and costly process — it started in the 2030s and ended just recently, when the Arasaka Tower was rebuilt in the 2070s. By 2077, it was now the most fortified district in all of Night City.[1]

Filled with modern, cutting-edge architecture, City Center is where anyone can witness the unrivaled might of megacorporations. This is where the rich and overworked spend their lives, building up the economic power of Night City.

The Corpo Plaza is reaching for the sky with its brutal corporate skyscrapers and blinding floodlights. It serves as the heart of the district, as well as a home to some of the biggest corporations in the world, such as Arasaka, Militech, Biotechnica, Petrochem, and Kang Tao.

Next to it is Downtown. It's full of narrow alleys, night clubs, celebrities, and corporate stiffs. Here you'll find an abundance of office buildings and eccentrically shaped architecture — as well as exclusive apartments, hotels, and restaurants. Its northern waterfront is a mecca for artists and snobs, with galleries, concert halls and ateliers around every corner. Despite the elegance and power of Downtown, it isn't as secure as it would seem: turn down the wrong alley and you'll find yourself en-route to sleazy love hotels, dive bars, and shadowy corners where drug deals — and worse — are a common occurrence.[2]

If you stand in the middle of Corpo Plaza and observe what's around you - all the breathtaking megabuildings, office blocks, bars, clubs, architectural wonders and dazzling neon signs - it's hard to believe that only a few decades ago the area looked like a smoldering battlefield in the aftermath of the 4th Corporate War and the nuclear attack on Arasaka Tower. As anyone with a pair of optics can see, City Center was fully rebuilt, surpassing even its former glory with more modern and cutting-edge architecture. It serves one purpose, and one purpose only - to flaunt the city's economic power and prove that Night City is freer than ever before.[1]

From a distance, downtown Night City resembles a fortress, a Tuscan hill town where thick walls surround a huddled cluster of towers, its architecture designed to keep barbarians and rivals at bay. Here we see Neomilitarism in its purest form. Corporate power makes itself forcefully known, projecting with mind-boggling mass and overwhelming firepower the message that you, the individual, should just give up now. In truth, this pageantry is akin to a TSA checkpoint: a forceful show of security born of deep insecurity. Night City's center was obliterated by a nuclear explosion in the 2020s, in what was deemed a terrorist attack by the authorities. The destruction left behind a lasting sense of fragility on the part of Night City's corporations, a fear that, for all their power, a determined few armed with the right weapons could burn their domain to the ground. The resultant overcompensation turned the center into a fortified Mordor, where every tool of surveillance and control is employed to keep people in check. 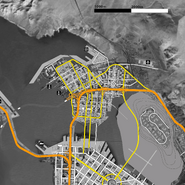