Cyberpunk 2020
Cyberpunk RED
The Bozos are one of the many gangs in Night City.

When the Bozos first appeared, they were simply considered a prankster gang. Their bodies were not mere costumes though, which had been biosculpted to look like clowns - complete with permanent frowns and long floppy feet. Their turf was mainly the artist's colony next to Night City University.

While they began as somewhat benign (if annoying), they developed over the years into something much darker, becoming the ultimate killer clown gang. Unlike the Julliard, Bozos were malevolent and predatory. To some degree or another, all of them were insane, with about a third of them firmly in the grip of cyberpsychosis. They would think nothing of torturing or murdering people for their own entertainment. They especially enjoyed playing on people's fears and anxieties - lurking in apartments in the dark, locking victims in small spaces filled with rats, stopping elevators midway and filling them with water, etc. The Bozos do not choose victims from the artist's colony where they live (unlike the Voodoo Boys), but will target victims anywhere in the city. It is not uncommon for them to pick on a single individual over and over to try to drive them insane.

It was rumored that their current leader at the time was a former Arasaka research tech, and that he made various devices for them. Many Bozos packed themselves with cyberware and they can occasionally also be found in the Net as well.[2][1]

By the Time of the Red, they were still present in Night City, having changed little since 2020s. People living on the gang's turf learned the hard way that if you see a pack of Bozos you just run.

Despite many years of rumors, no one has ever confirmed the existence of an individual known as "the Great Bozo", the supposed leader of the gang.[1]

The Bozos vanished from Night City a few decades back, though they are still talked about by 2077. Maximum Mike, host of Morro Rock Radio, mentions them when talking about Ozob Bozo, who he theorizes could be related to the Bozos based on his appearance.[3]

And Bozos rhymes with Boros.

Frowning clown face with slogan "Let's have some fun!"[2] 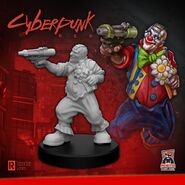