The Arasaka Waterfront is a port and a sub-district of Watson in Night City.

The Waterfront is the bulwarked island of the corporate authority in the lawless lands of Watson. Unless you are an Arasaka employee, you are not welcome at all.

The Arasaka Waterfront is an important link in the corporation's local supply chain. Official data states that hundreds of shipments come through the Waterfront every month, packed and sorted by automated robots to be sent to other corporate-owned warehouses and outposts. That being said most people are unable to see much of anything inside.

The Japanese zaibatsu built a wall all around the Waterfront to keep Watson inhabitants at bay; gangers, scavengers, and meddlesome reporters. It's reinforced with motion detectors, electrified razor wire, and autonomic armored gun turrets, the wall protects Arasaka property from unwanted guests and trespassers.[1][2]

When it comes to the Waterfront, it's pretty simple - either you're from Arasaka, or you should leave the area. The megacorporation has made the Waterfront its logistical hub - according to official figures, every month hundreds of shipments are inspected and stored in automated warehouses, then shipped all over the country. What's in those shipments and what really goes on at the Waterfront is unknown. The Arasaka Waterfront is surrounded by a reinforced wall equipped with extra security measures. Officially, it's there to protect Arasaka's interests against gangs, scavengers, nosy reporters and the ordinary residents of Watson who might accidentally "get lost". But is that the real reason?[2]

This sub-district includes the next fast travel points:

The Arasaka Corporation purchased a large chunk of Watson and transformed it into an ultramodern manufacturing and logistics facility. Arasaka razed the crumbling structures of old Watson, and in their place erected a Neomilitarist behemoth, a vast walled complex defended by guards and automated turrets. This sea of warehouses, hangars and autonomous assembly lines dramatically overwhelms the human form and bluntly pounds home the message with hundred-meter Arasaka logos: here the corporate machine rules, and man is nothing. 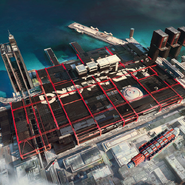 The tunnel to Little China with anti-corpo graffiti

The area is heavily guarded by Arasaka security forces