Cyberpunk 2077
Anders Hellman is a prominent bioengineer, most known for having the leading role in the creation of the Relic program.

Anders Hellman was an expert in neural networks and had a number of successful patents under his name, He was considered to be one of the cornerstones of Arasaka scientific project development. His most prominent role within the megacorporation was steering the advancement of the Relic Project as its director. Using the Soulkiller's source code, Hellman created a new piece of technology that is capable of communicating with personality constructs. His invention, regardless of being a celebrated breakthrough, remained a generally controversial topic.[1]

During his time working with as the Relic Project director he was in personal contact with Saburo Arasaka and his children, being on a first-name basis with Hanako Arasaka.

In 2077, a Relic prototype was stolen by Yorinobu Arasaka and taken to Konpeki Plaza in Night City. At one point, Hellman contacted him to warn him that the biochip was not ready or functional[2], and that he should consult either his father Saburo or him before taking action. In a later phone call, Hellman expressed concerns about personal liability. Yorinobu showed no sympathy, complaining about his father instead, and was only willing to check Hellman's notes he had sent.[3] Presumably as a consequence of this, Hellman alerted Saburo about the biochip's theft, which led to him and Hanako Arasaka to travel to Night City on the Kujira[4]. Caught between a rock and a hard place, Hellman begun negotiating employment status with Kang Tao.[5]

During or shortly after Yorinobu's rise to CEO of Arasaka, Hellman deserted the corporation without formally terminating his employment contract, defecting to Kang Tao. However, the extraction was not covert enough to elude the attention of Rogue Amendiares, who tracked the engineer down. The AV transporting him was brought down over Jackson Plains by V and Panam Palmer. The Kang Tao escort's subsequent efforts of evacuating Hellman to the nearest CHOOH2 station were foiled and the VIP was tracked down and, despite his attempts to engage in dialogue, incapacitated and taken to Sunset Motel.[6].

The Aldecaldos nomad clan, who had taken initial casualties after approaching the downed AV in a presumably hostile manner, worked with the mercenaries, concealing their tracks

Hellman opened the subsequent interrogation by asking for his location and whether the mercenary had been sent by Yorinobu. At V's reassurance, he mistook them for the hiring agent of a rival corporation, offering his loyalty for sale.

Once the mercenary revealed that Silverhand's engram was killing them, Hellman had to admit that the project had not left the trial phase by the time he left Arasaka. Where the previous version of the Relic had been used to communicate with pre-saved engrams, the prototype had been designed at Saburo Arasaka's personal commission to install and activate the personality construct in a new, "neurally indifferent" body. Intrigued by the scientific challenge in front of him, Hellman connected his personal link to V. He interrupted the subsequent examination to give the mercenary the news that their neural network had deteriorated to the point where it would no longer function without the chip. The only recommendation he had was a hospice in Sweden to minimize pain during the terminal stages.

V proved unwilling to accept this suggestion, and they and Hellman queried each other for details. He asked if the construct had influenced their decision-makiung and revealed that a violent takeover of Johnny Silverhand's engram was unlikely in the favour of a more gradual takeover. When it became clear that the mercenary refused the hospice, Hellman offered to help them if they accompanied him to Kang Tao, or giving them the blueprints if they thought anyone else could help them.[6]

At that point, the interrogation was interrupted by the arrival of Goro Takemura, who had been previously called by V and wanted Hellman as a witness about Saburo Arasaka's murder due to his close contact with Yorinobu in the time prior.[6] When the mercenary left the room, Hellman tried to build rapport by appealing to the ex-bodyguard's more civilized side, but found himself threatened with waterboarding instead.

Hellman arrived with Takemura to pick up V as they headed to rescue Hanako Arasaka from the Arasaka Estate, expressing low confidence in the merc's ability to stick to the plan due to the engram's progressive effect on their psyche. Revealing the identity of the engram to Takemura, he warned him to keep an eye on them as the mission developed.

Takemura did not appreciate the warning and even went so far as to threaten Hellman for a perceived insult of V. As an explanation why he had gone unpunished for his attempted desertion, he briefly noted that he was worth more alive than harmed or dead.

If V did not save Takemura:

Seeing V aboard the Arasaka Orbital Station, Hellman explained that despite the successful surgery, the damage it caused had been too severe and that V would only live for another six months. By authorization of Hanako Arasaka, he then presented them with a contract to join the Secure Your Soul program, storing a digitized copy of V's psyche in Mikoshi until a new body became available. Hellman told V that they were free to refuse this offer, but warned that the alternative would be a short and painful life.

If V signed the contract:

Once V took the document into their hands, Hellman casually mentioned that since a digitized psyche was not considered an individual, but rather property of the Arasaka corporation, and that the contract itself was in fact the relinquishment of human rights. He assured V that this was well-known to the program's current participants, and nobody had yet complained.

After V refused to sign the contract, Hellman left their fate to the Arasaka staff. He expressed unspoken anger at V's decision and walked out of the room. 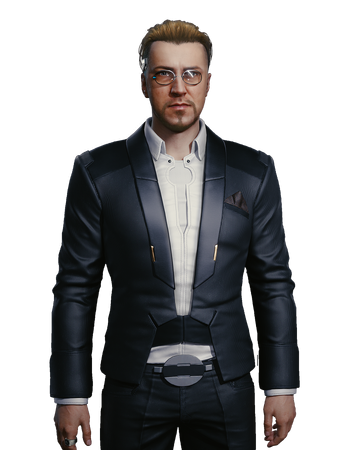 Anders Hellman is Arasaka's leading bioengineer - an expert in neural networks with a number of groundbreaking patents under his belt and one of the megacorporation's pillars as director of the Relic project.

Using Soulkiller's source code, Hellman created a piece of tech capable of communicating with personality constructs. He has a pretty high opinion of himself - he believes he's irreplaceable and too valuable for Arasaka to simply ever let him go...[1]