Between US 101 and Rocky Ridge

Cyberpunk 2020
Cyberpunk RED
Cyberpunk 2077
She who lives in the hearts of her loved ones can never truly die.

The Aldecaldos are a nomad clan and one of the Seven Nations.

The Aldecaldo family was the first true nomad family to form during the 1990s as Los Angeles turned into a war zone. Juan Aldecaldo started out in the defense industry, much of the extended Aldecaldo family depended on Juan for various needs. Juan led his family as the migrated from the US to Mexico City and as time went on his leadership became stronger. The Aldecaldos returned to the US with an increased numbers of nomads.

In 2077, the Aldecaldos are one of the two Nomad groups inhabiting the Badlands. They have a long history of frequent conflict and warring with the outlaw nomad group, Raffen Shiv who call themselves as the Wraiths. Unlike their aggressive rivals, the Aldecaldos are more open to making deals with V.[1]

They make temporary camps in the desert but never as a single group simultaneously. Their caravans operate in the Free States on the West Coast where they transport passengers and merchandise over state borders in large, well-guarded convoys. Cyberware and other equipment used by the gang include reflex boosters and heavily modified cars and bikes.[2]

The Aldecaldo family was the first true nomad family to form, though at the time they were not nomads, but casualties of the city. Before the Collapse, Los Angeles was arguably one of the greatest cities in the world. It was also, in some areas, one of the worst. In the 1980s and 1990s, parts of Los Angeles devolved into a war zone, as did so many of America's inner cities. There was rampant drug dealing, prostitution, gang activity, theft, arson, and all species of violence. The only thing missing was hope.

Los Angeles was not just where they made movies, it was also what they made movies about. The movies were about cops and gangs, the rich and famous, and the city that made the movies. They still have not made a film about Juan Aldecaldo and with everything that has happened, they never will. Juan's story begins before that, before the quake took so much of LA into the sea.

Juan started life as a migrant. He had a stable home life, and received a decent education in the California school system. He went to College, the first of his family to do so, and received a engineering degree. From there, he entered the defense industry and tried to raise his family as best he could. There never would have been a story had things not changed.

The defense industry took numerous hits in the two decades before the Collapse. A lack of war and a lack of budget forced much of the industry to down-size, putting Juan out of work. Much of the extended Aldecaldo family depended on Juan, and he did what he could to help them; taking a job in a grocery to ward off collectors, selling his home to buy enough food. In spite of his efforts, the family spiraled downward into cheaper neighborhoods, again and again, until they were living in the city's worst slum. He implored his son and his daughter to remain in school and escape their bleak future. His daughter, Maria, was killed in a car accident the day before her seventeenth birthday. His son Ramon, greatly distressed by his sister's death, eventually dropped out of school. He started seeing a Filipino girl who was a member of the Red Dogs gang, and eventually he became a member as well. Ramon was shot to death in a so-called robbery/homicide on his nineteenth birthday. His father was only a few blocks away when it happened. The police and of course the ever-present media were at the scene. No one knows what the newsmen said to Juan Aldecaldo, but his reply was replayed on television screens all across America.

"There is no place for you here! I want to see the surveillance camera tapes! Do you even have the sense to look? What are you people, jackals and vultures who make your living off of the poor victims of this country? My son was a good boy - you tell your audience that. He was a good boy with a good family in hard times. If we had been able to send him to school he would have been a great man, not like you and your cameras, a good man. All he wanted was for his mother not to be threatened. For his family to have a nice house. Who of you has such lofty goals? You are as bad as the police. They come here and fill out their reports. They say they will do 'all they can' to find the killers of my son and they lie!

In 2002, the Padre died of a heart attack in his sleep. Juan struggled on alone, leading the family as best he could, and the Aldecaldos continued to prosper and grow under his guidance. He began seeking a successor as he grew older, though none would be found for a long time. Elders argued for an election, but Juan wanted no part of politics; he knew any type of internal competition would eventually ruin the family. Just before the Mexico City re-development contract was signed, Juan Aldecaldo suffered a heart attack, and though it set him back personally, he pushed the family forward.

The years in Mexico City were good for the Clan. Juan's health improved, and the family had time to consolidate and re-equip themselves. Though grisly in the beginning, Mexico City proved to be very lucrative as well. When the walkers came across Mexico, they received help from the Aldecaldos, and assistance moving on to other nomad families if they wanted it. The Government was not happy with the Aldecaldos' actions, and they tried to prevent the clan from coming back over the border. There were too many nomads, though, and not enough border guards.

When the Aldecaldo Clan returned to the US in 2015, they brought a few extras with them. They brought the body of Juan Aldecaldo, to be buried near his wife and children in Los Angeles. They brought a new group of nomads, fresh from the Long Walk, and bitter about the way they had been treated. They also brought back America's favorite Rockerboy, Johnny Silverhand, who had been hiding with them for most of two years. Their most telling change, however, was a new leader: a man named Santiago. Born in Los Angeles, raised in the Clan, and tempered by dealings with the Long Walk, the charismatic Santiago was appointed leader at Juan's deathbed. For many years he was simply Santiago, but now he was Santiago Aldecaldo.[3]

Around 2077, Saul Bright led his Aldecaldo family to the Badlands of Night City in order to find new work for them, differing from the smugling traditions the other Aldecaldos around the NUSA were still doing.

In addition to scavenging and hiring themselves out as manual farm laborers, Aldecaldos also engage in bootlegging and transporting stolen goods. Some clans and families focus solely on smuggling and delivering their "packages" all along the Nomad Trail all the way to the twin Crime Cities, which are Chicago and Phoenix.[2]

The seven Nomad nations wander the highways of the former United States, looking for work in the blasted lands between its cities. Each nation is comprised of up to a million people, split into smaller tribes and clans. Most important to Nomad life are the families: tight-knit groups of up to a hundred that travel together, work together and rely on each other for almost everything.

The Aldecaldos arose in Los Angeles when outraged migrants gathered around Juan Aldecaldo and his moving protest against the gang violence that killed his son. The group then took to the road, adopting the Nomad lifestyle. They journeyed to Mexico before returning to California to bury their leader. They are currently camped near Night City, their RVs and souped-up cars parked in the desert, in truck lots on the edge of town and around abandoned distribution centers. From these bases they sometimes make their way into the city to stock up in trucks that serve as mobile workshops. But for the most part they stay out at the edge, scavenging from nearby corporate farms or transporting or smuggling goods for whoever will pay.

Nomads embody the utility and efficiency associated with our Entropism style. Their clothing must withstand the hardships of the road, combining military-survivalist motifs with elements of biker and road warrior culture such as leather jackets, knee pads (or protective implants) and trucker hats. 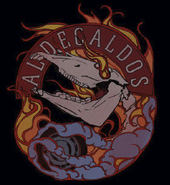 Description of the Aldecaldos from the digital artbook

Retrieved from "https://cyberpunk.fandom.com/wiki/Aldecaldos?oldid=94396"
Community content is available under CC-BY-SA unless otherwise noted.