Solo of Fortune 2
Pacific Rim Sourcebook
Firestorm Shockwave
Cyberpunk RED
Cyberpunk 2077
You look like a cut of fuckable meat. Are you?

Adam Smasher is a full-borg solo and rival of Morgan Blackhand. He is employed by Arasaka and by 2077, has risen to the position of head of security and the personal bodyguard of Yorinobu Arasaka.

Smasher is a towering cyborg, with little humanity left to be seen - not that he ever had much. After being reduced to mush by an RPG blast, Arasaka offered him a choice - either pull the plug or become a full body cyborg. With little to no options and a lack of care for his human side, he agreed and became more machine than man.

Adam has no empathy for others, including his fellow employees, but Arasaka kept him alive, so he lives to repay their kind deeds to him by killing the enemies of the corporation.

Adam Smasher was a fairly typical punk, a worthless New York City mook who joined the Army when his gang was wiped out. After several years in uniform, he was discharged for bad conduct and took up being a contract gun-boy in his home city.

It was a good life for Adam, as his lack of squeamishness and sadistic thoroughness brought in enough jobs to keep him in guns, gear, drugs, and brutal one-night stands. But he finally went on that one job where everything fell apart. A couple of rockets turned him into meatloaf. His buddies backpacked what was left of him out of the zone and back to the Big Apple. A mysterious corporate benefactor took note and made him the classic offer he couldn't refuse: corporate service in a metal body, or death. As if thoughts of lost humanity would bother Adam.

Seven years later since then, the new cybernetic Adam Smasher had made quite a name for himself along the eastern seaboard. He hired out for almost any mission presented to him, as long as it wasn't an obvious suicide or double-cross. He did have one stipulation: Collateral damage and civilian casualties are a must. During this he had developed a quiet rivalry with Morgan Blackhand along the way, seeing the classic Solo as a threat to his metal-is-better-than-meat worldview. Adam had repeatedly tried to challenge him to a face-off, but Morgan only ignored him at every possible confrontation. Naturally, this snubbing had simply stoked the cyborg's psychopathic rage higher.

Meanwhile, his secret benefactors had allowed him time for freelancing. That had changed with the war; now, Adam is somewhat fully employed by his patrons, who turn out to be a branch of Arasaka security. All this was fine with him, especially since he knew that Morgan was currently working for Militech.[1]

In 2022, Adam Smasher was recruited by Arasaka to fight in the Fourth Corporate War. Adam was more than happy to fight for Arasaka because he knew Morgan Blackhand had been hired by Militech. Arasaka supplied him with everything he could ever want, including the DaiOni power armor conversion gear that turned Adam into a nearly unstoppable machine. During this time, on August 23rd, Smasher was present at what would become the Night City Holocaust at the top of Arasaka Tower. That night, as remarked by a former SpecOps operative who was present at the mission, Smasher and the rest of the Arasaka troops ambushed Johnny Silverhand and Morgan Blackhand's team. However, Silverhand distracted him, shouting and firing at him with his gun, getting injured by Smasher in the process, yet giving Shaitan an opportunity to hold Smasher back.[2] Despite that, Adam had injured Johnny badly, leaving him to be retrieved from Arasaka medical team.

Smasher later appeared at the top of the tower, preparing to fight Blackhand as the rest of the extraction team left on their aerodyne. Blackhand remarked about testing Smasher's philosophy for itself shortly before the nuclear bomb detonated.[2]

After the bomb, Smasher survived and was retrieved by Arasaka, who healed him by replacing what little was left of the man with yet more machinery. Smasher was supposedly tasked by Saburo Arasaka to take care of Silverhand's body and his possessions, being one of the few people who knew were Johnny was buried.[3] Shortly after Adam disappeared for many years.

During the next decades, Smasher would come and go from Night City. He also teamed up with Rogue Amendiares for a time.[4]

At some point after 2045, Smasher seemingly found more of Silverhand's possessions in Samantha Stevens' garage, and around the country. Although he had sold much of Silverhand's items, he decided to keep some of them - including Silverhand's Porsche and his signature gun the Malorian Arms 3516.[3]

Some time after 2050, Adam was assigned as Yorinobu Arasaka's bodyguard and was placed in charge of carrying out Arasaka's dirtiest work, gaining a reputation for expert management of loose ends.[5] During this time, Adam made the Ebunike Docks in Watson his base of operations. Jeremiah Grayson, one of his most loyal men, became his right-hand, and for a job well done, Smasher gifted him Silverhand's unique pistol.[3]

Smasher resurfaced again a few years before 2077 while doing some jobs for Arasaka.[5]

By 2077, Adam was still Yorinobu's bodyguard. He usually accompanied him to the Konpeki Plaza penthouse. Even scaring guests such as Evelyn Parker who was visiting Yorinobu.[6]

A number of weeks after, while the mercs V and Jackie Welles conducted a heist for the Relic in the penthouse, Smasher accompanied Yorinobu as his father Saburo arrived to talk with him. Smasher and Saburo's bodyguard, Goro Takemura, left shortly before Yorinobu snapped and strangled his father. Smasher attempted to stop the witnesses, V and Jackie, but they manage to escape before he could catch them.[7]

Upon Saburo's death, Yorinobu became CEO of Arasaka, promoting Smasher to Head of Security. During the memorial parade for Saburo, Sandayu Oda warned Smasher that the parade was to be sabotaged in an effort to harm Yorinobu's sister, Hanako Arasaka. Smasher brushed off Oda's warnings, accusing Oda of disobeying Yorinobu as Oda persisted in questioning Smasher's actions. Oda was ultimately correct - with V's help, Takemura gained access to Hanako's float in order to kidnap her. Smasher afterwards led an Arasaka strike team, personally rescuing Hanako and ordered for her kidnappers to be killed.[8][9]

If V asked Panam for help in Nocturne Op55N1:

Once Adam found that intruders had broken into Arasaka Tower through the underground, he made his way to the Mikoshi access point to kill the intruders. He found members of the Aldecaldos; Panam Palmer, Saul Bright, and V. After destroying the gate, Saul shot at Adam's chest which had wounded him right before Adam killed him. A fight between the three broke out as Adam asked where Rogue was and as yelled he'd find her after dealing with the Aldecaldos. However Adam was defeated in the battle.[5]

If V let Johnny and Rogue go in Nocturne Op55N1:

Adam as well as the rest of security were on high alert after an unidentified flying vehicle had assaulted Arasaka Tower. He suspected it must have the work of the Queen of Fixers and his enemy - Rogue Amendiares. Adam made his way to the Mikoshi access point discovering Rogue, Crispin Weyland, and V were behind the assault. He confronted Rogue, however before he could kill her she detonated a grenade on his chest wounding him in the process. He then began to fight V and Crispin. Adam was defeated during the battle.[5]

If V asked Hanako for help in Nocturne Op55N1:

During Yorinobu's military coup on Arasaka, Hanako's faction slowly had taken over Arasaka Tower with Goro Takemura and V leading the troops to the CEO's office. However Adam intercepted them right before they could enter the CEO's office in a last ditch effort to protect Yorinobu. V and Takemura began to fight Adam as he asked where Rogue was and as yelled he'd find her after dealing with them. Adam, however, was defeated during the battle.[5]

If V and Johnny went alone to preform a suicide run in (Don't Fear) The Reaper:

Adam Smasher intercepted V before they made it through to Mikoshi access point alone. A fight between the two broke out as he asked where Rogue was and as yelled he'd find her after dealing with V. Adam was defeated during the battle.[5] 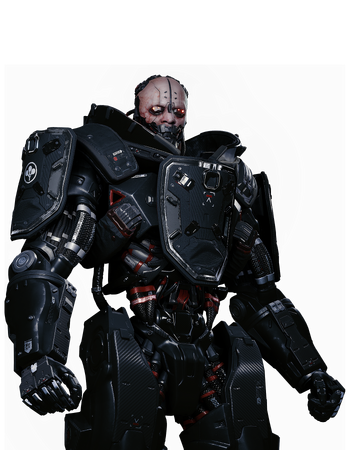 What with a full-body conversion, not much is left of Adam Smasher the man. Well... his humanity was always questionable. Smasher's in charge of taking out Arasaka's dirty laundry, but he likes to do things his own way. Way back in 2023, he killed Johnny Silverhand during the attack on Arasaka Tower, after which Silverhand's personality was digitized by the Soulkiller program. If Smasher finds out that Johnny's back, he'll probably want to finish what he started. Smasher doesn't leave loose ends.[5] 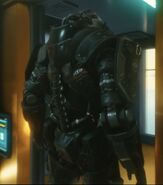